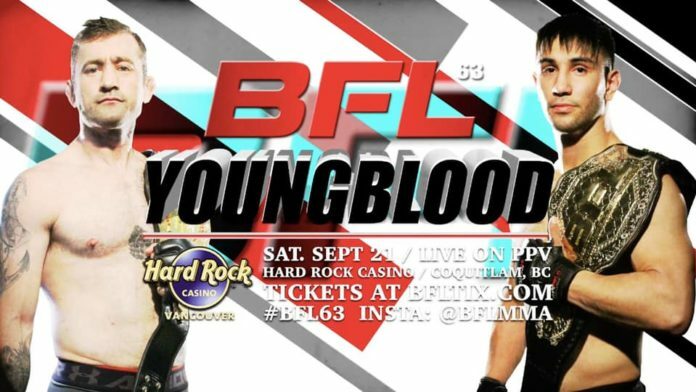 Battlefield Fight League goes down on Saturday evening from the Hard Rock Casino in Coquitlam, British Columbia. We will be bringing you BFL 63 results all night long.

There are five titles on the line at BFL 63, with two in the professional ranks, two amateur MMA and one amateur kickboxing.

Two pro titles up for grabs at BFL 63

The main event features one of the best strikers to come out of British Columbia, Dejan Kajic. The Universal MMA product will take on Latin America’s Ricardo Centeno. Another knockout artist is set to take to the BFL cage in the evening’s co-main event, as lightweight champion Achilles Estremadura welcomes Carson Frei to the Battlefield cage.

The amateur featherweight title is up for grabs as Gwyn Berry steps in as a late replacement and looks to write back history against Dakota Angel. The first time these two squared off, Berry took home a very close split decision victory. Gio Platon puts his amateur bantamweight title up for grabs against highly touted Donavin Morris.

The final championship fight will kick off the main card, as Sound MMA’s Taran Bir goes up a weight class to become a two-division champion when he takes on James Sebunyana.

If you can’t make it to the fights live, make sure you check out the online PPV HERE.

Check out full BFL 63 results below.