UFC on ESPN 6 (informally known as UFC Boston) is a wrap. Unsurprisingly, there was no shortage of good fights and exciting finishes. Oh, and of course, it just wouldn’t be modern MMA without a fat dose of controversy. So join us as we break down the main card fight-by-fight.

Going into the UFC on ESPN 6 main event, there were two big questions—How would Dominick Reyes handle a high-level wrestler, and how does a light-heavyweight Chris Weidman perform? We found out the answer to both of those questions in less than two minutes. Weidman pressed Reyes against the cage but was unable to control the taller fighter. In response to the offensive wrestling, Reyes cage-ground Weidman’s clasped hands against the fence.

Despite cutting significantly less weight, Weidman’s chin faltered from a beautifully timed straight left from Reyes. Weidman fell to the ground and used up-kicks to keep Reyes off of him. Although they bought him some time, the up-kicks would not be enough. Bypassing Weidman’s legs, Reyes was able to finish the fight with hammer strikes. Officially, Dominick Reyes defeated Chris Weidman via KO/TKO at 1:43 of the very first round. Reyes took to the microphone and called for a title fight against Jon Jones. Now 12-0, with six of his victories coming in the UFC, it may be time for Reyes to fight for a belt. However, Corey Anderson and Johnny Walker fight at UFC 244 in about two weeks. With an impressive performance,  the winner of that bout could also have a strong case for a title shot.

After their original booking ended in a no-contest less than one month ago, a grudge match took shape. In the lead up to the rematch at UFC on ESPN 6, Jeremy Stephens stated: “If he don’t die, it doesn’t count.” Well, nobody died, but the bout counted as ‘Fight of the Night’ in the boss’s eyes. As many had expected, the battle was back-and-forth and wildly entertaining. Both men showed just how capable they both were in the octagon. Evidenced by their embrace after the final bell, the rivalry looks to have been put to bed. They both had given each other every ounce of fight they could muster, and mutual respect would understandably result. As is the case in every fight, there could only be one winner. Yair Rodriguez defeated Jeremy Stephens via unanimous decision. All three judges scored the contest 29-28 in favor of Rodriguez.

Greg Hardy utilized a more measured attack against Ben Sosoli than he had in previous fights. This was a good strategy as Sosoli was more than capable of standing with the heavy-handed Hardy. Throwing leg kicks, high kicks, and jabs, Hardy would go the distance for the first time ever in his MMA career. In doing so, this fight marked a major stepping-stone in his development as a mixed martial artist. Unfortunately for Hardy, the bout was marred by controversy—and it wasn’t the typical black cloud we usually see hovering above his fights.

Between the second and third rounds, Hardy asked a commissioner if he was allowed to use his inhaler. According to Hardy, he was greenlit by said commissioner. After being told he could do so, Hardy used his inhaler before competing in the third round. With confusion among viewers looming, the fight went to a judges decision: Greg Hardy defeated Ben Sosoli via unanimous decision. Each judge scored the bout 29-28 in favor of Hardy.

However, upon review of the inhaler matter, the commission overturned the decision victory to a No Contest. This fight will undoubtedly be another hard lesson for the “Prince of War.”

Thirty-five-years-old and coming in off a 559-day layoff, Joe Lauzon was a +140 underdog against the Contender Series standout, Jonathan Pearce. But less than a minute into the contest, Lauzon tagged Pearce with a heavy straight right. Lauzon subsequently took Pearce to the ground and put him in a rare reverse half-nelson position. From there, he was able to land a flurry of heavy punches that would force referee Herb Dean to stop the fight. Joe Lauzon defeated Jonathan Pearce via TKO at 1:35 of the first round. This was Lauzon’s 44th professional fight and his 27th UFC fight overall. Lauzon has the most finishes in the UFC lightweight division at 13. Though nothing has been made official, Lauzon spoke candidly in saying this could be his final fight.

Maycee Barber has a goal to become the youngest UFC champion. She came into her bout against Gillian Robertson at a perfect 7-0. After the fight, her record was an even more perfect 8-0. Like a future champion should do, Barber quickly TKO’d the number-15-ranked Gillian Robertson at 3:04 of the first round.

Never at a loss for words, she called for her next opponent: “Only thing I know is Paige VanZant is waiting for a phone call. Paige VanZant, I’m giving you a call, are you gonna answer or not?”  Barber was referencing a recent TMZ interview where VanZant had more or less stated she was anxiously awaiting a fight. However, she may be disinterested in accepting this particular callout. Barber allegedly messaged VanZant’s husband over Instagram to ask about an exercise he had shared on his page. Given Barber’s public conflict with his wife, VanZant viewed this gesture as disrespectful. VanZant has also stated that she wouldn’t reward Barber’s trash talk by fighting her. But Barber seems determined to make the fight happen. Whoever she fights next, Barber has looked impressive thus far. It would appear ‘The Future’ is now.

Deron Winn missed the 186-pound weight limit by two pounds. Due to this mishap, he relinquished 20% of his fight purse going into UFC on ESPN 6. The commission gave the docked pay to the much-larger Darren Stewart. As the fight began, Winn utilized his offensive wrestling. To wit, Winn took Stewart down three different times in the first round. By the third takedown, Stewart seemed to accept fighting off his back for the remainder of the first stanza.

But by the second round, Stewart began taking over. Winn briefly got Stewart to the ground. But Stewart quickly got back on his feet. Momentum seemed to shift in Stewart’s favor the longer the fight was standing. This continued into the third round as more time was spent on the feet. Stewart was quite clearly out striking his opponent. Desperate for a victory, Winn rallied late in the third round. The last-minute push gave him a good case to earn the decision. One judge even scored the fight for Winn. But Darren Stewart had already presented the more compelling case for victory as he took the split-decision. Darren Stewart marks Deron Winn’s first professional loss. 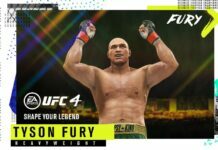