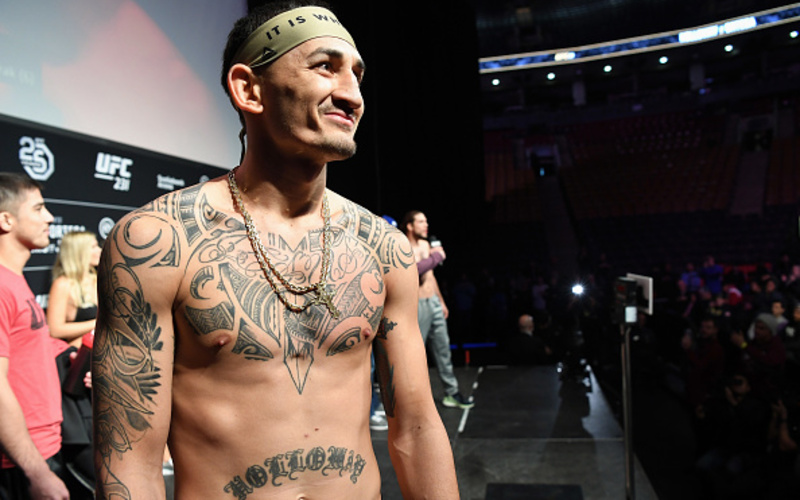 Nate Diaz and Jorge Masvidal compete for the BMF title in the UFC 244 main event. There are a number of different potential contenders for being the ‘Baddest Mother F*****’ in the game. Some of the MMA Sucka staff suggest alternative candidates for the BMF title and outline some of their most gangster moments.

Featherweight king, Max Holloway. Not only is he on a 14 fight winning streak at featherweight, but he never turns down a fight. ‘Blessed’ is undefeated at 145lbs since 2013,  amassing an impressive 10 finishes on his way.

His most gangster moment? There are three BMF moments that stick out in Holloway’s career. Firstly, we have the infamous Ricardo Lamas ‘Bring it’ moment. Holloway was clearly ahead on the cards and yet, in the final ten seconds, pointed to the centre of the octagon and indicated for Lamas to throw down with him. With both men swinging away it provided one of the most iconic fight finishes in UFC history.

The second iconic moment is when Holloway was scheduled to fight Khabib Nurmagomedov on short notice. Nurmagomedov is one of the most feared grapplers in the entire game. To take a fight against him on a full camp is hard enough but to take the fight on short notice is serious gangster stuff. Although the fight never came to fruition, to even accept the fight shows something about Holloway’s character.

The final gangster moment may have gone under the radar in the grand scheme of things. When Holloway faced challenger Brian Ortega, he was the underdog going into the fight. We all know how the fight played out, with Holloway putting on one of the most dominant performances of his career. It is a moment in the first round however is of note. With thirty seconds left, Holloway wobbles Ortega and then mimics his wobble. It’s only a small thing in the scheme of things but it certainly sticks out.

What defines a ‘bad mother effer’? Is it their criminal record? Perceived fearlessness? Perhaps it’s their fighting style. Or maybe it is their refusal to be disrespected. Whatever it is, you know it when you see it. Especially in a sport like mixed martial arts. With that being said, I pick Wanderlei Silva as my alternative BMF champion. He’s no longer active in any meaningful capacity, but that man was as ruthless as they came. Silva had a ferocious fighting style. He would wing punches at his opponents like somebody who had caught a stranger in bed with their wife. Silva would stare at his opponents with the perfect blend of intensity and excitement—excitement for violence. Even outside of sanctioned fights, Silva is famous for his temper among rivals. From shoving Quinton ‘Rampage’ Jackson to fighting Chael Sonnen, Silva was never known for taking any disrespect lying down.

If ever a man exhibited all the prerequisites of being a bad mother trucker, it’s Justin Gaethje. He personifies the title in all of his actions, both in and out of the famed Octagon. Dude is just a flat-out savage. He will fight anyone at anytime and will do so in a phonebooth. He simply doesn’t care. He’s a fearless monster who once engaged in combat follows a simple gameplan. Stalk, plunder, repeat if necessary.

Prior to coming into the UFC Gaethje ran up a perfect 16-0 record with fourteen of those wins coming via stoppage. If you fought this barbarian, two things were happening. You were losing, and you were losing consciousness.

Gaethje entered the UFC and waged war with Michael Johnson in his debut. He stopped Johnson in the second round and though he’d lose his next two fights, it was beyond clear that this was a different kind of animal. He simply doesn’t seem to care about his own well-being.

He’s in the midst of the most amazing run of his career. In true B.M.F. form, he has stopped three consecutive top tier fighters, all in the first round. He beat James Vick, Edson Barboza and Donald Cerrone all via first-round stoppages. Let that sink in. He’s called out Conor McGregor in what would be a heck of a fun fight but I think Conor has other ideas. I can’t blame him, I wouldn’t want to face the Terminator of Violence either. Justin Gaethje is undoubtedly a Bad Mother Effer!

In an era where fighters bitch (some rightly, others not) about not wanting fights, waiting on the sidelines, there was one guy who was saying “yes” anytime a fight was offered: Donald “Cowboy” Cerrone.

I’m not sure there is a singular B.M.F. moment to pinpoint for Cerrone. He has had numerous amazing fights and finishes. He never phones it in. It’s his attitude as well to take any fight, no matter the notice that to me solidifies him as a badass. This also has led him to fight three or four times a year, fighting four times in 2019, going 2-2. Last year he fought three times going 2-1.

If I had to pick a fight that exemplifies his B.M.F. status is his fight against “Platinum” Mike Perry. Previous to this fight, a lot of trouble was brewing between Cerrone and his former team Jackson Winkeljohn MMA Academy. He believed the training going on there was wrong and didn’t like how their methods changed, in his opinion for the negative. As well, teammate Mike Perry called out Cerrone for a fight. When the rare teammate vs. teammate fight was booked, Mike Winkeljohn said that he would be cornering Perry, not Cerrone. Cerrone took this a major insult and left the camp. He formed his camp to prepare for the fight. What did he name his team? The B.M.F Ranch.

Cerrone went on to beat Perry by armbar submission. The win netted him a performance of the night bonus as well the most finishes in UFC history and most wins in UFC history.

Is Cerrone the best fighter in the world? No, and I think he would even admit it. To me, he exemplifies what a fighter is. He always brings it and you know he will never be in a boring fight. That is why Donald Cerrone is a B.M.F.

When you try to decide who the BMF in the game is, it’s tempting to automatically think of your favourite male fighter who hits hard, talks trash and has a natural swagger about him. Despite this, my nomination goes to Amanda Nunes, the first female two-division champ in UFC history.

My reason for picking ‘The Lioness’ is simple. No other fighter has dispatched of TWO ‘greatest of all time’ champions with such ease. Rona Rousey may have lost to Holly Holm in the bout immediately prior to Nunes, but most people still regarded her as the greatest female fighter of all time. Nunes was the betting underdog, but this meant nothing in reality. She eviscerated Rousey in the very first round, showing fearsome power, speed and aggression. Not only did Nunes beat Rousey, but she ended the Californian’s MMA career. Let me repeat. Nunes beat the greatest female fighter of all time so badly that she never wanted to return to the sport in which she was one of the biggest superstars. That’s one bad m’er f’er.

Perhaps even more impressive, however, is how Nunes claimed the featherweight championship of the world. Cris Cyborg was, and perhaps still is, the most frightening woman to ever step foot in the UFC octagon. Every single opponent Cyborg has faced since her debut loss has been demolished by the Brazillian, who boasts 17 victories via knockout. Before Nunes fought her at UFC 232 it was seen as a near-impossible challenge to match Cyborg for strength. In the bout itself, 51 seconds is all it took for Nunes to march Cyborg down and leave her a crumpled heap on the side of the cage. Nunes was fearless, bit down on her mouthpiece and dragged Cyborg into a wild brawl. It was perhaps one of the most shocking victories in MMA history, not for the fact that Nunes won, but how she did it.

Nunes fights the best and makes opponents look like they’re unfit to lick her boots. Make no mistake about it, she’s a bad motherf*****.