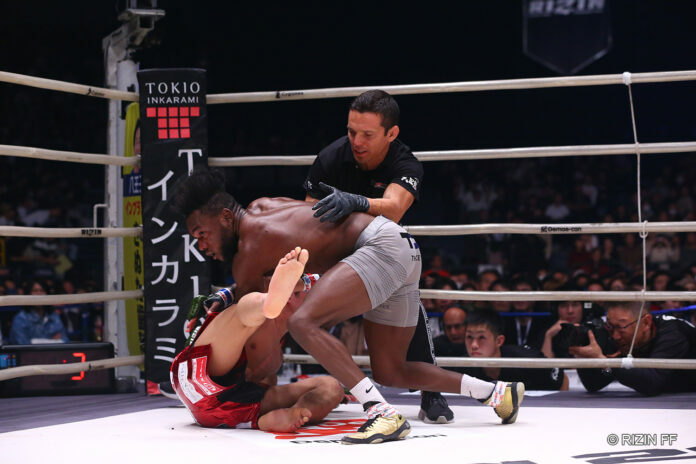 In a highly anticipated second match between the two bantamweights, Kape finished the tough younger Asakura brother in the second round by TKO. Kape’s win crowned him the new bantamweight champion after former holder Kyoji Horiguchi vacated the belt due to an ACL injury. The first fight between Kape and Asakura was a close split decision for the latter. It is expected that Kape will fight number one contender Hiromasa Ogikubo at a future show.

Azerbaijan’s Tofiq Musayev defeated Johnny Case and Patricky “Pitbull” Freire in the same night to become the lightweight Grand Prix winner. He defeated Case by TKO in the first round and Pitbull by unanimous decision. During the second round, Musayev received a yellow card in what might be an MMA first. Musayev was taking down Pitbull near the ropes. Pitbull fell out of the ring and one of Musayev’s teammates dived to grab Pitbull by the arm. Musayev looked strong in all three rounds, rocking the Bellator fighter a few times and taking him down as well.

In a very closely contested fight, ROAD FC atomweight champion defeated Ayaka Hamsaski to become the new RIZIN super atomweight champion by split decision. This is the third time they have fought with Hamsasaki winning the first two encounters. The first round saw the familiar foes brawl on the feet. The second round Ham managed to lock in a triangle choke early but Hamasaki was able to withstand maneuver to the bell. The third round saw Ham pummel Hamasaki, possibly breaking her nose.

Rest of the Card:

Jiri Prochazka easily retained his title against former UFC fighter C.B. Dollaway. Prochazka sent Dollaway to the canvas after a right hook in the first round. The Czech champion was gunning for a fight with Bellator light heavyweight and heavyweight champion Ryan Bader but that fight didn’t pan out and got put against Bader’s training partner Dollaway. This fight was supposedly the last on Prochazka’s contract.

To order the replay of RIZIN 20, go to FITE.TV.