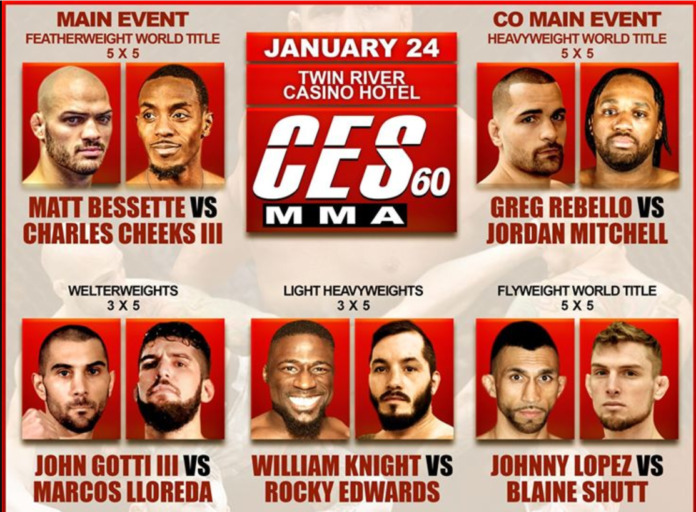 CES MMA 60 results can be found here live tonight and we’re going to have the recaps as well. If you can’t catch the action on Fight Pass, you can catch the action right here. The card takes place at the Twin River Casino in Lincoln, RI. The card is stacked and features three world title fights as well as the return of John Gotti III. You can check out our preview of this event here.

The main event pits UFC veteran Matt Bessette against Charles Cheeks III for the CES featherweight title. It should be a good fight and both guys are skilled competitors. There is also a heavyweight title on the line when Greg Rebello takes on Jordan Mitchell. Lastly, the flyweight title is on the line as Johnny Lopez will battle Blaine Shutt.

Matt Bessette def. Charles Cheeks III via Knockout at 4:01 of Round 3

A good first round from both fighters as Bassette and Cheeks did well standing. Cheeks landed a couple of good shots, and they clinched a good amount as well. Close round, back and forth action. I scored it for Cheeks.

Bessette attempts a flying knee but is taken down by Cheeks for his efforts. The Mauler locks on the rubber guard. Matt Bessette goes for a kneebar but wasn’t able to get it set. He again tries to tie up a leglock and Cheeks lands a few shots from the top. They scramble to their feet and tie up in a clinch to end the round. This is a close fight that could be 2-0 Cheeks.

Cheeks delivers a couple of shots to open the third, and seems to have a cut. Not sure how he got cut. Cheeks with a takedown but falls into a tight guillotine choke. This looks deep. Cheeks works his way out and they get back to their feet. Cheeks and Bessette throwing some big shots but then they clinch against the fence. Bessette is landing the better shots now and then lands a HUGE left/right combo and that’s a wrap. Bessette wins via KO!

Greg Rebello def. Jordan Mitchell via TKO (Ground Strikes) at 1:07 of Round 2

The doctor was in between rounds but it wasn’t clear what he was checking on with Jordan Mitchell. The fight continued. Rebello is able to take the fight back to the canvas and starts throwing some heavy shots from the mount. The referee jumps in and stops the action. Tough ask for Mithcell to take the title fight on two day’s notice and it was all Rebello.

The first round was a good back and forth round. Gotti landed some big right hands, but Lloreda wore them well. Lloreda got the fight to the canvas and was able to take Gotti’s back and look for a submission. Nice sweep by Gotti and he lands some decent elbows from the top. Gotti scores another takedown in what was an entertaining first round.

Lloreda is landing some spinning shots to the body to open the second round. Gotti seems to have slowed a bit and is taking more shots than he’s landing. Lloreda goes for a flying knee, Gotti catches him and slams him. John Gotti is able to move to back control, and then side and lands some short elbows. Gotti nearly falls into a triangle choke but the round ends.

Gotti dives into an ill-advised double and jumps right into a guillotine choke. He’s able to get out, and finishes the takedown and passes to half guard. Gotti gets swept into the mount, and momentarily gives up his back. Gotti gets loose and ends up in top position. Some good scrambles but I scored the fight 2-1 for Gotti III.

Johnny Lopez immediately pushed Shutt up against the cage and held him in the clinch to open the first round. Shutt turns and lands a huge throw on Lopez. Lopez immediately back to his feet and again utilizes the clinch. Shutt landed a nice right hand after separating from the clinch. The close round could go either way.

The second round is slow, with both men pressed against the fence. For two men who make their living grappling, there haven’t been many takedown attempts. Lopez lands some short elbows along the fence. Blaine Shutt lands a solid knee to the head. Shutt gets a takedown and attempts the Suloev Stretch but runs out of time.

The third round sees some grappling, with Shutt holding a slight advantage. He did eat some short elbows but landed some shots on his own against the fence to the body. The two trade knees and Shutt again gets the better of the striking. The round ends with Shutt securing the takedown. Shutt up two rounds to one on my card.

The fourth round was another round spent in the clinch against the fence. This fight has slowed to a crawl and is somewhat difficult to sit through. You have two young fighters with a chance to win a world title, and nobody is doing anything. Lopez closes the round with a takedown and it could be all squared heading into the final round.

The first round sees the fighters hit the mat and Shutt is going for some crazy submissions. He nearly completes the Banana Split but isn’t able to close it out. He does keep the dominant position and nearly scores with the Twister. I gave the final round to Shutt, and he could well have won the fight.

Ashiek Ajim def. Andres Rodriguez via Knock Out (Punches) at 3:45 of Round 3

A pretty spirited first round that took place on the feet. Both men had limited success but Rodriquez landed more shots to earn the first round on my card.

Andres Rodriguez takes a poke to the eye and halts the action in Round 2. He’s able to continue fighting. Ajim is starting to earn the advantage of striking. He’s swaying the fight in his direction. Ajim lands a nice takedown as the round closes to win the second round.

The third round opens and Rodriguez is starting to get picked apart. Triple-A lands a nice right hand, and then a straight left, wobbling Rodriguez. As Rodriguez backs off, Ajim lands a left and then a big right hand as Rodriguez slumps to the canvas.

William Knight def. Rocky Edwards via TKO (Punch) at 2:56 of Round 3

Slow fight for two-plus rounds. Not a ton of action to call. Both men look slow on their feet and exchange weak leg kicks and jabs. Crowd not loving the action, and I can’t say I blame them. Knight wins the round based on ground control.

William Knight gets taken down and gave up his back for most of the second round. That said, he was able to control Edwards’ arm from the bottom and for the better part of three minutes, nothing really happened. Fans were bummed as the second round ended.

Heading into the third round even, UFC bound William Knight landed a big right hand, and that was that he scored the third-round TKO victory.

Richie Santiago def. Giorgi Kudukhashvili via TKO (GNP) at 1:15 of Round 2

Richie Santiago started slow, dropping the first round. In the second round, Santiago scored the takedown. He was able to move to back control and landing some big shots from the top forcing the referee to halt the action at 1:15 of the second round. Nice TKO victory for Santiago.