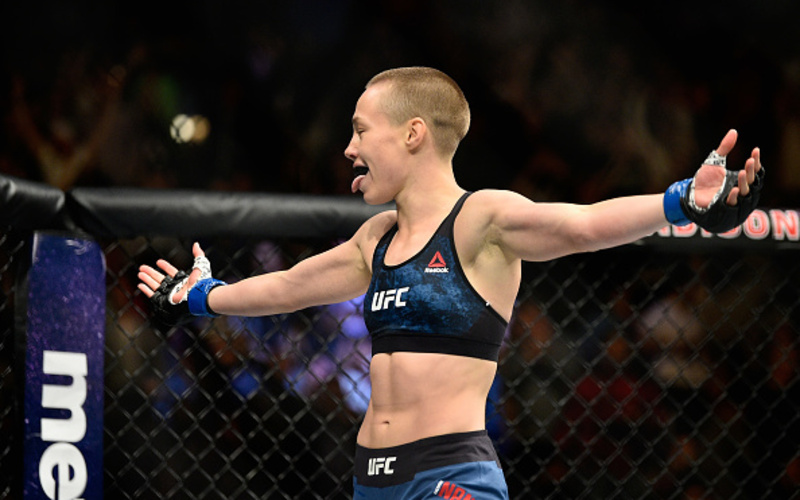 We’re back with another Today in MMA History article. Since COVID-19 has cancelled most MMA events, MMASucka has decided to take a look at some fights from the past. Today’s article features an early fight in the career of a former UFC women’s flyweight champion. That’s right, we are talking about about Rose Namajunas‘ flying arm bar win over Kathina Catron at Invicta FC 5.

Namajunas was a 1-0 professional coming into this fight with her first victory coming back at Invicta FC 4 where she submitted Emily Kagan in the third round. Catron walked into the fight with a 2-1 record, but she was coming off of a submission loss to Jordan Nicole Gaza at XFL 11.

The fight itself didn’t last long at all, I think Namajunas spent more time celebrating in the cage than actually throwing punches. The fight started with Namajunas landing a left hook to the face of Catron. Both fighters would exchange some small shots in the clinch until Namajunas jumped up and landed an incredible flying arm bar. Catron tapped immediately as the arm bar was sunk in, ending the fight in 12 seconds.

Rose Namajunas moved to 2-0 when submitted Kathina Catron with a ridiculous flying armbar just 12 seconds into their fight, seven years ago today. After the win Namajunas lost her mind. #UFC #Invicta
pic.twitter.com/3mzDTGcGG3

After her loss to Namajunas, Catron would go on to defeat Summer Artherton. She would continue to bounce around  promotions and built up a 7-10 record. Her last fight was in 2017 where she lost to Montana De Le Rosa.

After her quick flying arm bar win Namajunas went on to lose her next two fights to Tecia Torres and Carla Esparza. She would then pull together three straight victories over Angela Hill, Paige VanZant, and in a rematch over Torres.

Eventually, Namajunas set her self up for a title fight against Joanna Jedrzejczyk at UFC 217. Coming in as an underdog, Namajunas shocked the world with a TKO victory over Jedrzejczyk in the first round. The rematch against Jedrzejczyk happened at UFC 233, and Namajunas defended her title with a unanimous decision victory. However, her title run would come to an end at UFC 237 where she was knocked out due to a slam from Jessica Andrade.