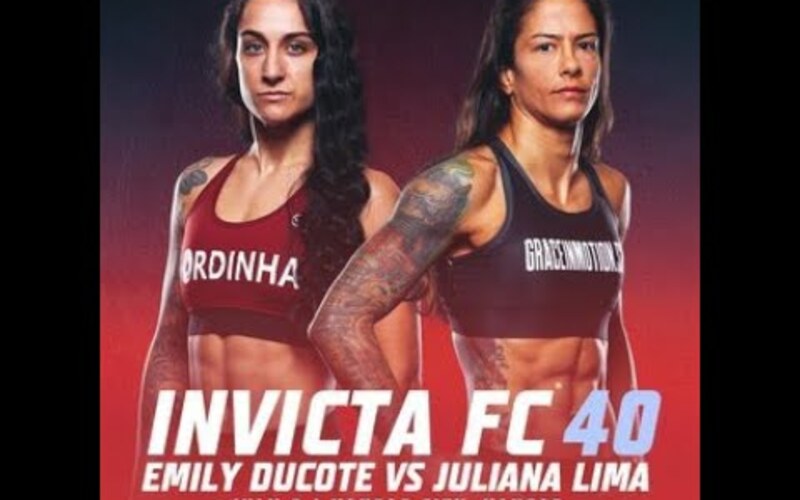 We’ll have your Invicta FC 40 results and recap as they happen here tonight if you’re unable to catch the event live. It’s a rare Thursday night card from Shannon Knapp and Invicta FC but it should be one for the books.

In the main event, Emily Ducote will take on Juliana Lima. While the two are a combined 3-5 in their last eight outings, they’re both talented fighters who need a win here in the Invicta strawweight division. Lima will be looking to break back into the UFC after going 3-4 in the promotion, including a win over Nina Ansaroff. Ducote, a Bellator veteran, will be looking to get back to her winning ways and improve to 2-1 in the promotion.

In the co-main event, Alesha Zappitella will take on Lindsey VanZandt in a clash of atomweights. The fighters are an impressive combined 13-5 as professionals and this should be a pretty fun fight. You can catch up on the Invicta FC 39 results here.

The fight opened with both fighters standing and trading punches. Lima looked for a clinch and a takedown, but Ducote did a good job shrugging her off. Lima landed a couple of big strikes that seemed to stun Ducote but Emily Ducote secured the clinch along the fence. Juliana Lima walked her down and landed some big kicks and punches. Emily Ducote showed some swelling near her eyes as the first round ended. All three judges scored it for Lima.

The second round opened and Lima again established her striking advantage. She was throwing harder more accurate punches. Ducote landed a couple of kicks and a right hand, but there isn’t much on them. She wasn’t sitting down on her punches. The pace slowed down midway through the round but Lima was still landing the bigger shots. Ducote landed a few nice shots and scored a late takedown. Emily Ducote worked to side control and then into the mount. Ducote landed a series of elbows and hammer fists. The judges have it 19-19 across the board.

The winner of the final round would win the fight. Emily Ducote did a good job being the busier fighter early and pushed Lima against the fence. Lima was hit with a couple of nice left hands and a cut opened under her right eye. Emily Ducote did a good job rebounding after a tough first round. Midway through the final round and Ducote had an edge. Emily Ducote with an edge in striking as we entered the final 90 seconds. Ducote picked up the pace and secured a late takedown which should do more than enough to give her the 29-28 victory. The judges agree and score it 29-28 unanimously for Emily Ducote.

The first round opened and VanZandt tied to utilize her four-inch reach advantage. She was pretty quickly taken down but made her way back to her feet. Alesha Zappitella had a pretty obvious wrestling advantage and kept VanZandt on her back for extended periods of time. Zappitella landed some nice elbows from side control. The first round went to Zappitella on all judge’s cards.

The second round was more of the same as Zappitella scored the takedown and controlled from the top position. VanZandt got to her feet and landed a very nice spinning heel kick but Zappitella wore it well. Nice leg kicks by Lindsey VanZandt once she got to her feet. VanZandt got the better of the striking but it might not be enough to sway the judges. The fight is scored 19-19, 19-18, and 20-18 for Zappitella after two rounds. One judge scored the first round 10-8 for Zappitella. Interesting to say the least.

Chelsea Chandler def.  “Liv” Parker via Rear-Naked Choke at 1:05 of Round 1

Liv Parker once weighed 325 pounds, but now fights at featherweight. She lost the weight in the gym, dropping 150 pounds in four years. Slugfest to start the fight. Both fighters came out and tried to land at range, but Chandler dropped her with a wicked straight left. Chandler followed her down and looked to secure the rear-naked choke. She applies the choke and Parker is forced to tap!

Fighters came out slugging. Laura Gallardo is a wrestler and tried to take the fight down succeeding on her second attempt. Cicero had the height and reach advantage but wasn’t able to get anything going early as Laura Gallardo was active with her takedowns. Gallardo got the better of the round with her takedowns and the judges all scored it 10-9 for Gallardo.

The second round opened with Trisha Cicero attempting to work behind a jab and set up some punches. Trisha Cicero had more success standing in this round, but Gallardo was able to score a couple of takedowns. Cicero got back to her feet fairly quickly and controlled the round with her striking. Two judges scored the round for Cicero and one scored it for Gallardo. 19-19 on two cards and 20-18 for Gallardo heading into the third.

Round 3 saw a lot of kickboxing in the first half of the round. Cicero had the edge and landed some strong calf kicks. Gallardo had less steam on her takedown attempts in the third round. Cicero landed a couple of nice right hands over the top. The third round was big for Cicero who also defended a number of takedowns. I scored the fight 29-28 for Cicero. Judges scored it for her as well, via Split Decision.

After a lengthy delay due to a power outage in the arena, the first bout of the evening kicked off. Goodin had a substantial reach advantage in this clash of strawweight fighters.  The first round saw a bit of grappling and Goodin executed a big slam but Koren escaped an armbar. Koren utilized some good submission grappling first attempting a triangle choke and then an armbar attempt. Judges had open scoring and two scored it 10-9 for Goodin twice and one had 10-9 Koren.

The second round opened and Koren executed a lovely hip toss. The fighters made it back to their feet and had a bit of an exchange, not leading to too much damage. Goodin seems the more active submission artist on the bottom, but Koren does a super job defending. The round closes, lots of submission attempts, but not too much being accomplished. Judges have it 19-19, 19-19, and 20-18 with one judge favoring Goodin after two.

The third round was a kickboxing match in the first half of the final round. Koren was getting the better of the striking, landing nice kicks and shots to the body. Great scramble and both fighters made it back to their feet. Koren again tries to take the back standing but gets dumped to the mat. The fight ends on their feet, without a ton of shots landed. Judges score it for Goodin.