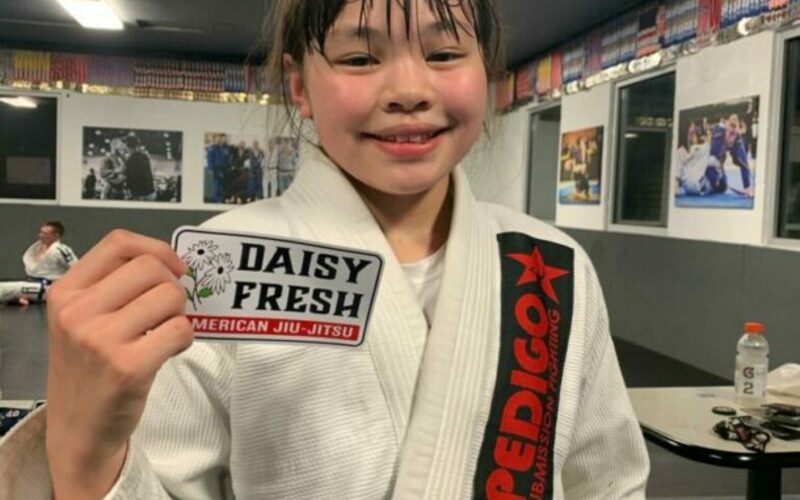 As if Third Coast Grappling’s Kumite IV: The Absolute tournament didn’t already turn heads, their first Kids Grappler Royale is making its debut on the card. This will feature nine youngsters in a no-gi, submission only format. Unlike traditional rule sets (because nothing is ever traditional about 3CG), two kids will start in the middle and every minute new music hits and a new kid runs in. The last kid standing wins. 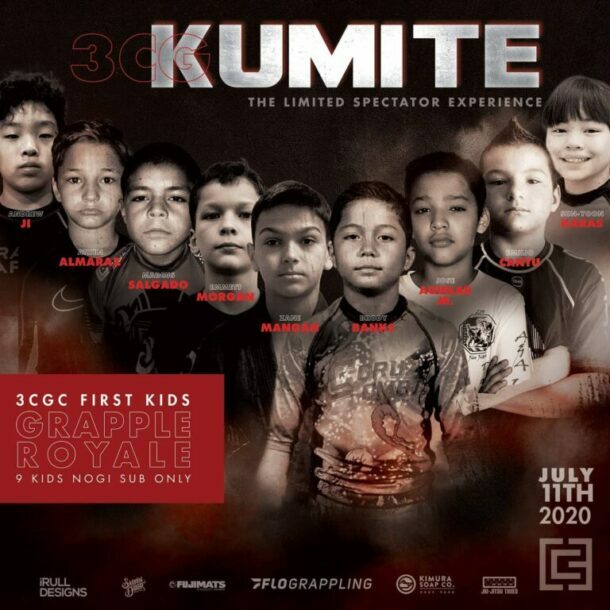 Out of the nine children on the card, there is only one female – Sun-Yoon Karas. MMA Sucka recently reached out to the 11-year-old, yellow belt from Pedigo Submission Fighting team to find out more about her and to get her thoughts on competing, being a female in BJJ, and her upcoming 3CG fight.

Karas started training BJJ at the age of seven under the tutelage of Chad Hawkins and Heath Pedigo. She related that she loves BJJ because it makes her happy and that it is her passion. Like for many of us, the mat is her happy place. When not training, you can find her studying matches or instructional videos. Some of her favorites to study are Nikki Sullivan, Grace Gundrum, and Kristen Martin.

The lone female, Sun-Yoon Karas has a true passion for BJJ

When asked about why she loves BJJ, she indicated that she loves the technique and strategy and that “one of the best feelings in the world [is] to learn single [leg] x and use it in a tournament for a big sweep.”

Karas also talked about learning a knee cut pass from her teammate, Andrew Wiltse, and being able to hit the pass in a tournament in front of him. To her, this is the best part of competition, which she does often – thanks to her parents’ support.

The 11-year-old credits her parents for giving her the opportunity to compete and travel all over the United States and Japan. She knows that this is not an opportunity that everyone gets, so she makes sure that she doesn’t waste it. If you follow her social media accounts, you’ll notice that she adds the hashtag #2025 to her posts. This signifies when she is able to compete as an adult, which is what all of her competitions are building up towards.

On 3CG’s Grappler Royale, Karas says that she gets nervous before she fights, but when the match starts and she gets to her game, she is fine and everything slows down. She also related that this competition will get her better and that all of her training and competitions are to get her to 2025. She doesn’t seem too concerned about the results, as she is always learning and evolving from her fights. The yellow belt also indicated that in her area, she faces boys that are bigger and stronger than her all the time and that the “amazing competitors don’t scare me because they’re boys.” It is actually rare for her to face a girl in competition aside from IBJJF, so her game is based on fighting bigger, stronger boys.

Her advice to girls about BJJ

They should learn for self-defense, to be healthy, productive, and goal setting. Jiu-Jitsu has given me the goal of owning a business and passing on knowledge to others. I want to work with survivors of domestic violence and people who are wanting to protect themselves. My dad always says that “the night is dark and full of terrors” and “if you want peace prepare for war.”

Karas also offers this bit of advice to girls in BJJ:

My advice is don’t quit when it gets hard and I promise it will get hard. It took me a year to win a competition. Jiu-Jitsu takes time, focus, and hard work. PSF has some beliefs that “iron sharpens iron” and “check your ego at the door.”

You can be sure that the only female out of PSF will be turning heads this Saturday. Sun-Yoon is definitely one tough cookie and someone to keep an eye out for in this next generation of grapplers.