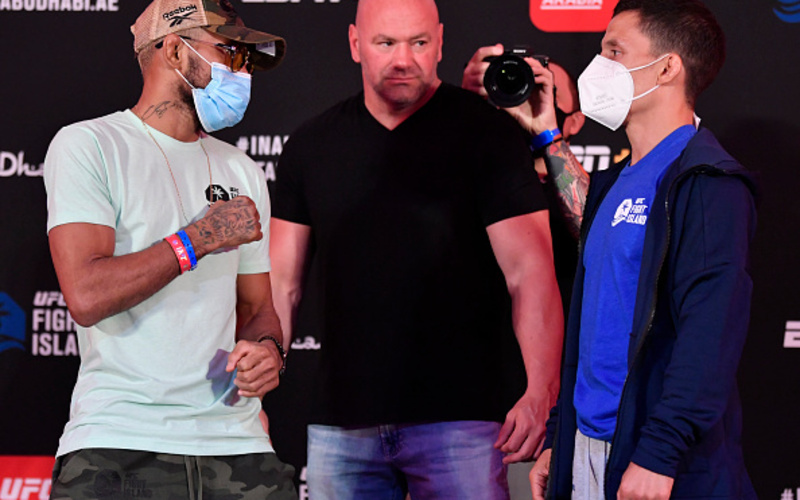 Another title is on the line on Fight Island, this time being the UFC vacant flyweight title and we will have UFC Fight Night 172 results all night. In a rematch of their vacant title fight in February, Deiveison Figueiredo looks to leave no questions unanswered as he takes on Joseph Benavidez. The pair first met at UFC Fight Night 169, but with Figueiredo missing weight, only Benavidez was eligible to win the title. In the second round, Figueiredo finished the fight, defeating Benavidez by TKO. Now, with both men making weight on Friday, the flyweight division will soon have a champion again. For Benavidez it will be his fourth attempt to win UFC gold. As for Figueiredo, now being eligible for the title, he looks to perform as well as last time.

In the co-main event, Jack Hermansson looks to get back on track as he faces off against Kelvin Gastelum. From 2018-19, Hermansson put together an impressive four fight win streak. Three of those wins came by finish as he defeated Thales Leites by TKO, followed up by defeating Gerald Meerschaert and David Branch by submssion. The wins would earn him a main event slot against Ronaldo Souza at UFC Fight Night 150. After five rounds, Hermansson picked up the win by unanimous decision. He would go on to earn another main event fight, taking on Jared Cannonier at UFC Fight Night 160. Hermansson’s win streak was snapped that night as Cannonier won the fight by TKO in the second round.

As for Gastelum, he enters the fight on a two fight losing streak. This streak kicked off at UFC 236 when he faced Israel Adesanya for the interim middleweight title. He would lose to Adesanya in a wild fight by unanimous decision. He returned to the cage at UFC 244 to welcome former welterweight title challenger Darren Till to the middleweight division. Gastelum dropped his second straight fight that night as he lost to Till by split decision.

Kicking off the main card will be an important fight in the flyweight division. With a record of 4-1 in his last five outings, Alexandre Pantoja looks to further climb the ranks. Standing across from him will be the undefeated Askar Askarov who is coming off a unanimous decision win over Tim Elliott.

Next up will be a fight in the women’s flyweight division as Ariane Lipski takes on Luana Carolina. After dropping her first two UFC outings, Lipski picked up her first UFC win over Isabela de Padua. As for Carolina, she enters off a win in her UFC debut over Priscila Cachoeira at UFC 237.

Finally, before the co-main event, Marc Diakiese takes on Rafael Fiziev in a lightweight bout. Diakiese enters off a two fight win streak with wins over Joseph Duffy and Lando Vannata. As for Fiziev, he is coming off his first UFC win as he defeated Alex White at UFC Fight Night 162.

Follow along with MMASucka as we provide you with the results throughout UFC Fight Night 172.