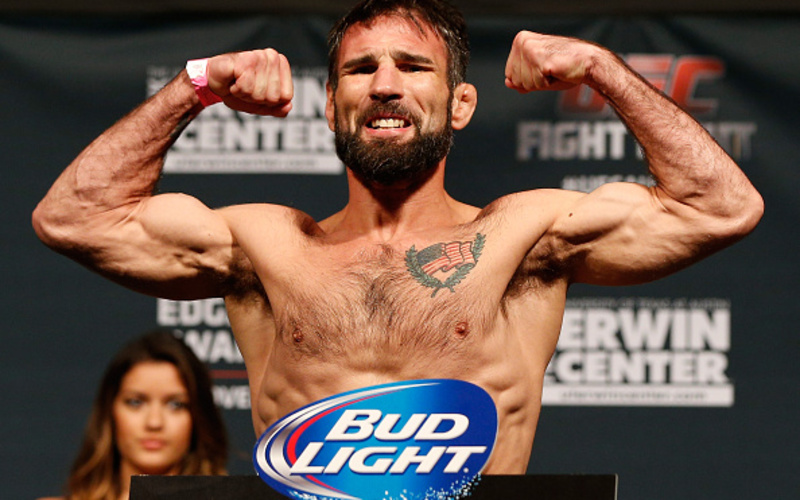 Tonight’s the night ladies and gentlemen. Bare Knuckle FC 11 is back and they are in front of a live audience. For those of us who love BKFC, this has been a long time coming. The Covid pandemic shut down the events. The feature bout tonight is a lightweight championship match between Isaac Vallie-Flagg and Luis Palomino. It should be one of a handful of action-packed fights.

The co-main event features a pair of heavyweights trading bombs as Dillon Cleckler takes on the game Frank Tate. Dillon Cleckler is a powerhouse who hits like a ton of bricks. If he lands clean without gloves on, you’re going to sleep. Frank Tate is a powerhouse in his own right and has been a mainstay of Island Fights. It’s going to end in a KO, bet on it! If you can’t watch the action live, we’ll have results as they happen as well as recaps of the fights. You can read a preview of tonight’s event right here.

Luis Palomino def. Isaac Vallie-Flagg via KO at 0:45  of Round 1

The championship fight didn’t take long! Luis Palomino caught Vallie-Flagg with a massive left and right combination and knocked him to the canvas. Vallie-Flagg was badly, badly hurt and despite beating the count, he was out on his feet. The referee had no choice but to stop the fight. What a finish by Palomino who becomes the BKFC lightweight champion.

Dillon Cleckler def. Frank Tate via TKO at 0:59 of Round 3

Frank Tate entered the fight with a massive five-inch reach advantage. In the final minute of the round, Cleckler landed a series of massive shots and Tate showed a ton of heart to stay on his feet and stay in the fight. Tate was saved by the bell there in the first.

Good action in the second round and Cleckler landed the bigger shots. Tate is showing lots of guts and is willing to trade. This has been a fun fight, but after two rounds, it’s all Cleckler.

Cleckler landed a huge shot that dropped Tate. It was a right hand that landed on the ear. Tate again showed heart getting to his feet but was dropped again with another straight right hand and couldn’t beat the count. Big win for Cleckler.

The fight started and Brito and Harris wasted no time getting after it. Brito is trying to work efficiently behind his jab while Harris wanted to mix things up and fight inside. Lots of action and this was probably the most technical fight so far.

The second round saw more action, and Harris was able to get inside and force the dirty boxing. Brito covered up well, but the round was more in line with what Kaleb Harris wants. I’ve got it one round apiece heading into the third.

The third round came and went without much damage from either fighter. Brito landed a straight snapping right hand and Harris plodded forward but was unable to land much. Close round, advantage Brito.

Brito looked good in the fourth, landing the jab and counter punching well. Harris moving forward nonstop, unwilling to give an inch. That said, he just wasn’t able to pin Brito down and land anything damaging. Harris landed an uppercut and a nice body shot to close the round, but the jab from Brito controlled the round. I have it three rounds to one for Brito.

More of the same for Elvin Brito in the final round. Harris pressured Brito but didn’t land anything at all of consequence. Brito landed lead rights and then avoided Harris. Harris was super game but just couldn’t solve the defensive riddle of Elvin Brito. I scored the fight 49-46 for Brito.

Codie Shuffield def. Herbert Morgan via TKO at 1:30 of Round 2

Once upon a time, Codie Shuffield beat Greg Hardy in a boxing match. Codie Shuffield oped the fight and flurries on Morgan, delivering a series of body punches and then going to the head. Shuffield wins the first round handily.

Shuffield lands a low blow in the second but Morgan can continue. Morgan continuously turns his back on the fight and was fighting a scared fight. Morgan eats some body shots and eventually just quit. He was never in this fight.

Louis Hernandez had a clear speed edge in the first round and utilized a reach advantage to keep Taylor at bay. Hernandez lands a left hand and sends Taylor to the canvas. It was ruled a slip. Solid round for Louis Hernandez.

The second round opened and Hernandez utilized his speed and footwork to his advantage again. Taylor closed the distance and landed some bigger shots. Bobby Taylor’s left eye is cut and he’s looking a mess. It was a better round for Taylor and this could be tied up heading into the third.

Bobby Taylor opened up more in the third and landed some damaging strikes throughout the round. Hernandez is bleeding from the nose and a big cut on his right brow. Taylor has taken over the momentum and looks good heading into the fourth round.

Bobby Taylor came out aggressively again the fourth and no longer has any difficulty getting inside. Hernandez has given up his reach advantage by not using his jab at all. The round saw less activity and it was a closer round than the third. Could be even but I have it three rounds to one for Taylor.

The final round was pretty close, but Taylor did more down the stretch and Hernandez seemed happy to avoid contact and ride out the clock. I scored it for Taylor 49-46.

Will Chope is six foot four and once fought Max Holloway at 145 pounds. That’s just unreal. He’s making his debut and immediately found himself dropped by a massive right hand. He got to his feet and was dropped again and finished. Will Chope absolutely crushed here by Elmore.

Tee Cummins def. John McCallister via TKO at 0:42 of Round 2

Tee Cummins opened the fight by rocking John McCallister with a straight right hand. They had a pretty furious exchange and the round ended with Cummins putting one round in the bank.

The second round opened and both fighters came out throwing bombs. John McCallister gets hit by a massive left hook and down he went. McCallister tried to get back to his feet and continue, but his legs weren’t under him and the referee stops the fight.