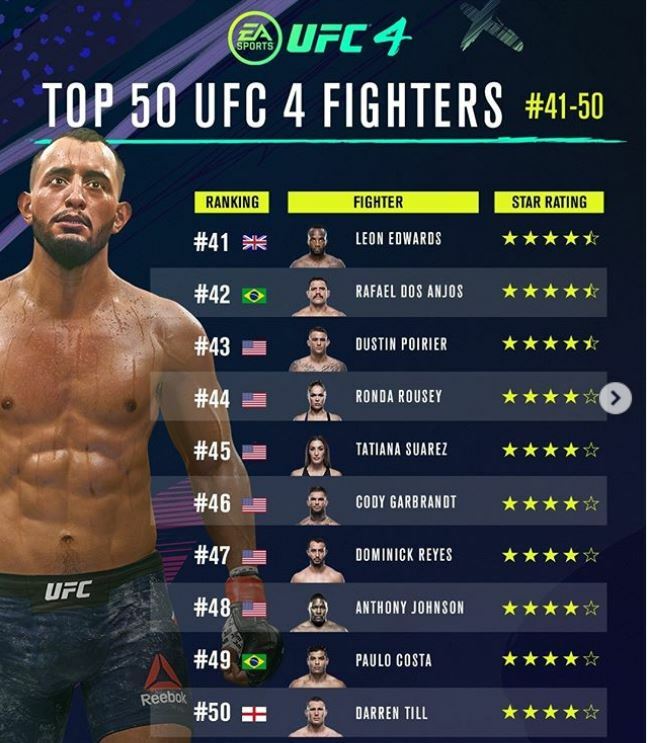 The fighters revealed so far are those ranked #50-41 in terms of overall ability out of the entire roster.

Did you miss the announcement for UFC 4 cover?

The fiftieth ranked fighter is Darren Till. The Liverpudlian middleweight striker has just emerged on the wrong side of a close unanimous decision against former middleweight champion Robert Whittaker at UFC on ESPN 14.

The forty-eighth ranked fighter is Anthony “Rumble” Johnson. The hard-hitting American light-heavyweight retired in 2017 after his unsuccessful title challenge against then light-heavyweight champion Daniel Cormier at UFC 206. However, he has announced his return to the sport for this year.

The forty-fifth ranked fighter is Tatiana Suarez. The undefeated American strawweight has climbed up to #3 in the official UFC rankings for her division. She did this with victories over fighters like Carla Esparza and Nina Ansaroff.

The forty-fourth ranked fighter is Ronda Rousey. The former bantamweight queen tore through her division in Strikeforce and the UFC. However, Rousey would retire after back to back losses to Holly Holm and Amanda Nunes.

The forty-third ranked fighter is Dustin Poirier. The Louisianan fighter-philanthropist is coming off of a hard-fought decision win over fellow lightweight Dan Hooker at UFC on ESPN 12.

The forty-second ranked fighter is Rafael dos Anjos. The former UFC lightweight champion turned top welterweight is coming off of a decision loss to Michael Chiesa at UFC Fight Night 166.