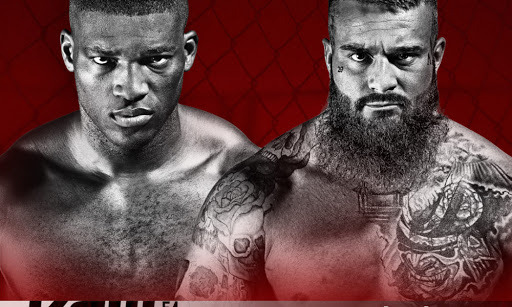 KSW is back in action after their successful studio show in July 2020, for KSW 53. KSW 54 will take place on August 29, 2020, again in Warsaw, Poland. So far the card has two confirmed bouts and one bout considered an “unconfirmed rumor” as the main event. KSW 54 can be seen on the KSW app or on KSWtv. That unconfirmed bout is Marian Ziolkowski vs. Maciej Kazieczko at lightweight.

Recently signed former boxing champion Izu Ugonoh will make his debut against an extremely tough test in Quentin Domingos. Ugonoh was 18-2 in his boxing career earning the IBF Mediterranean, WBO African, and WBA Oceania heavyweight titles. 15 of his 18 victories also came by knockout. Ugonoh is not only a dangerous puncher but can use his kicks as well. He is the winner of the 2009 WAKO World K1 Championships. Ugonoh is taking up camp at Berkut WCA Fight Team, home to such talents as UFC heavyweight Jan Blachowicz, KSW welterweight champion Roberto Soldic, and Olympic medalist Damian Janikowski.

Quentin Domingos comes into the contest with a professional record of 5-1. He has several first-round finishes but is all against untested fighters. Four of his five victories have come by first-round finish. The sixth win was a disqualification win. The Portuguese striker trains with Bulgarian Top Team. “Ruskov” is also making his KSW debut after spending time at 100% Fight and European Beatdown.

In the opposite of the previously discussed bout, veteran Michal Andryszak (21-8) takes on fellow veteran Michal Kita (19-11-1.) Andryszak will be making his eighth appearance in the KSW cage, with his first coming in 2014. 20 of his 21 victories have come by finish. When he enters the cage it will be less than a month from his last action. On July 31, 2020, he defeated Ion Grigore via head kick in nine seconds. Prior to that, his last four bouts were all in KSW earning a 2-2 record. Kita is a 40-year-old Polish heavyweight who also has a handful of KSW bouts. In his career, he has notable wins over Ricco Rodriguez and Alexy Oleinik.