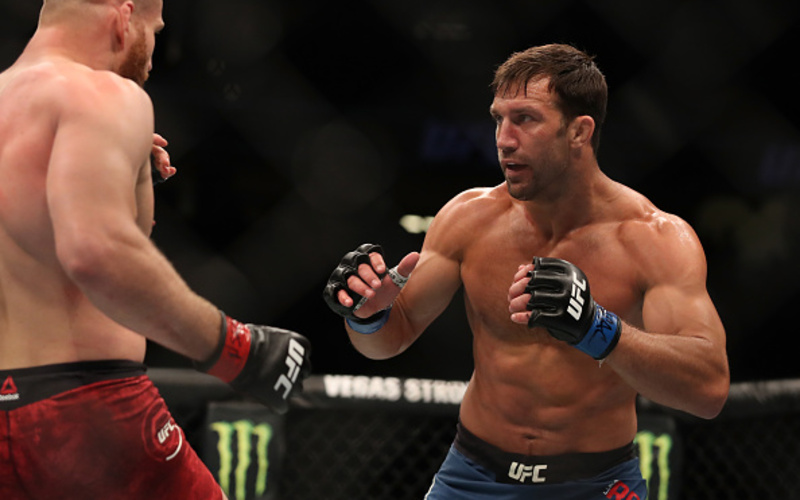 Former Strikeforce and UFC middleweight champion, Luke Rockhold has decided that he’s not ready to walk away from the cage. After stating back in October that he might well be done fighting he has now informed Ariel Helwani of ESPN that he hopes to be back in the cage by the end of the year. When asked why he opted to come back he simply stated, “Because I felt like it.”

Luke Rockhold has been helping Daniel Cormier ready for his trilogy title fight with Stipe Miocic and despite having some necessary rehab for should surgery, sees himself in the Octagon in 2020.  He wants to make his return as a middleweight, rather than going up to the light heavyweight division. He tested the waters at 205 and was knocked out by Jan Błachowicz.

Luke has lost three of his last four fights, albeit against elite-level talent. He was beaten by middleweights Michael Bisping and Yoel Romero. There is no shame in losing to either of those championship level fighters. However, many question whether or not his chin has what it takes to fight top-level talent.

What’s next for Luke Rockhold?

In his last three losses, he was stopped via TKO and it makes people wonder that if his chin has too many miles on it. He’s a veteran of 21 fights and has a 16-5 record. It will be interesting to see who he could meet in his return to the cage. One fighter that makes a lot of sense would be a clash with Chris Weidman who just defeated Omari Akhmedov and has a similar record as Rockhold, at 15-5. It would be an interesting clash of former champions.

Time will tell, as Rockhold continues to recover from shoulder surgery to repair a labrum and rotator cuff injury. He adds an interesting dynamic to the middleweight division.