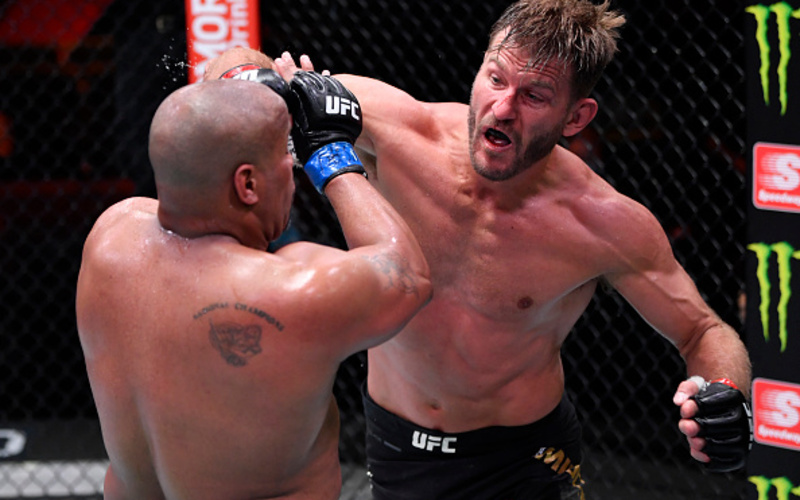 UFC 252 brought a much-anticipated pay-per-view event to the UFC Apex on Saturday night. There was lots of hype around the five-fight main card. Moreover, the event now has as much news to cover post-fight as there was prior to the event. This UFC 252 Post-Fight Matchmaker combats that, giving each the main card winners are given their next opponents.

Merab Dvalishvili utilized his excellent wrestling against a fighter with normally-reliable takedown defense in John Dodson en route to a unanimous decision win. After getting off to a rough start in the UFC by losing two in a row, “The Machine” has found his footing by winning five unanimous decisions in a row. He called out Sean O’Malley in his post-fight interview, but as will be discussed later, that is unlikely to happen any time soon. A fighter that makes more sense for him is perennial contender Raphael Assuncao. While Assuncao has lost three straight, they have all been against opponents currently ranked in the division’s top five. Assuncao’s grappling acumen should be a test for Dvalishvili, and the fight should be an excellent barometer to determine each fighter’s future in the division.

“The Pit” Daniel Pineda returned to the UFC for the first time in over six years, defeating Herbert Burns by ground-and-pound in the second round. He has only lost twice since being cut from the UFC in 2014, including a current seven-fight unbeaten streak. A good next opponent for Pineda is Jared Gordon. In his return to featherweight in July, “Flash” Gordon earned a dominant decision victory over Chris Fishgold after going 2-3 at lightweight. Both fighters have a gritty fighting style with a good mix of talent in striking and grappling and would make a fun fight.

Jairzinho Rozenstruik rebounded from a devastating loss in May with one of his own, defeating Junior dos Santos by knockout in the second round. The win proves that “Bigi Boy” deserves to fight at the top of the division. While both Derrick Lewis and Curtis Blaydes would be reasonable opponents for him, those two should be matched up with each other next.

As a result, Rozenstruik should face the winner of the upcoming fight between Alistair Overeem and Augusto Sakai on September 5. Sakai has won four in a row to start off his UFC career, and a win over Overeem would skyrocket him up the rankings. A Rozenstruik-Sakai matchup would be a great competition between heavy-handed strikers with big divisional implications. Overeem, meanwhile, is always near the top of the division. If not for the last ten seconds of his December fight against Rozenstruik, he would be on a four-fight win streak himself. “The Reem” would surely want to right that wrong, and a rematch would make sense if he beats Sakai.

Marlon Vera put the Sean O’Malley hype train on pause after he capitalized on an O’Malley leg injury to win by first-round TKO. Regardless of whether the injury occurred as a result of Vera’s leg kicks or by accident, Vera still got his hand raised. He will now move on to bigger and better things in the bantamweight division. If not for a controversial decision loss to Song Yadong in his previous outing, “Chito” would be on a seven-fight win streak.

Jimmie Rivera should be the next fight for Vera. “El Terror” recently rebounded from a losing streak with a win over Cody Stamann in July. The two have been scheduled to fight each other twice, and bad blood has been brewing between the two the whole time. Now is a better time than ever to make this grudge match and see who gets the chance to move into the upper echelon of the division.

Stipe Miocic brought an end to his trilogy with Daniel Cormier, winning by unanimous decision to retain his heavyweight title. This win cemented his legacy as the greatest heavyweight in UFC history, and likely in all of MMA history as well. While Jon Jones vacating his light heavyweight title gives credence to a potential move up to heavyweight, that is still very much up in the air.

Francis Ngannou is the clear next title challenger to face Miocic in the wake of that news. Since losing to Miocic in January 2018 and Derrick Lewis that July, “The Predator” has run roughshod through the division. He has won four in a row against both former champions and white-hot contenders, knocking three of them out in less than a minute and another in just 71 seconds. These wins are more than enough to make him the undeniable top contender and is even opening as the betting favorite despite Miocic’s relatively-dominant win over him previously.