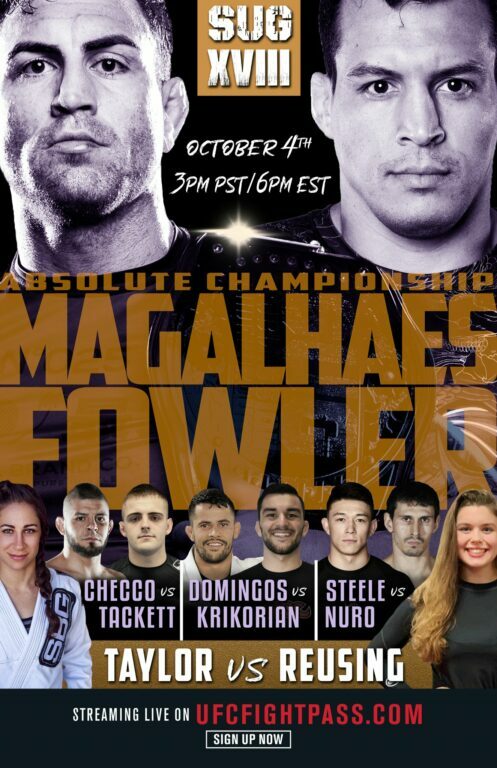 Submission Underground 18 (SUG 18) will go down on October 4 from Portland, Oregon and the promotion has just revealed the event’s main card.

The main event will be a battle for the absolute championship, as the current champion Mason Fowler squares off against veteran Vinny Magalhaes.

Fowler shocked the jiu-jitsu world, not once, but twice at the past two Submission Underground events. The first time came with some controversy. In the main event at SUG 16, Fowler took the champion, Craig Jones, to overtime and forced the referee to stop the action due to a neck crank. Jones and fans around the globe felt it was an unjust stoppage, so the two were set for the trilogy in the main event at SUG 17.

Much like their previous match, this one made its way into overtime and in a similar fashion, but without controversy, Fowler was able to finish Jones with a rear-naked choke in the second OT stanza.

Magalhaes last competed at SUG 13 where he verbally tapped due to a heel hook against Jones. He has been on the BJJ scene for years and has competed against the top talent in the world. The Brazilian has won ADCC and IBJJF Worlds in the gi and no-gi.

Also announced for the main card of SUG 18 are Gabriel Checco vs. William Tackett, Rafael Domingos vs. Keith Krikorian, Kody Steele vs. Bryan Nuro and Kendall Reusing vs. Leah Taylor.