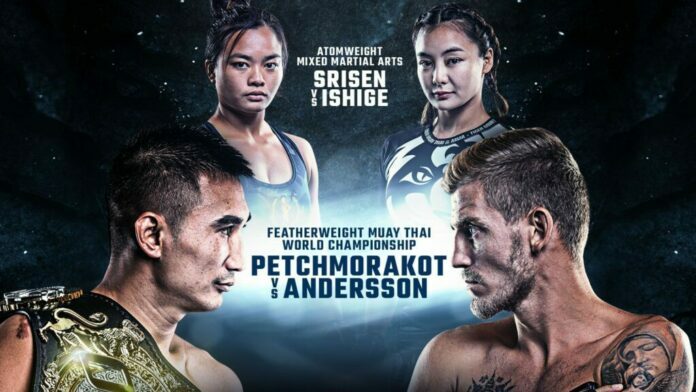 ONE Championship closed out their three-event ‘A New Breed’ series in Bangkok, Thailand, with ONE: A New Breed III on Friday, September 18. The five-bout event was capped off with a ONE Featherweight Muay Thai World Championship contest.

Petchmorakot Petchyindee Academy has shown himself to be a champion’s champion. He picked up the title earlier this year and has already defended it twice. At ONE: A New Breed III, Petchmorakot ramped up his pressure in two-plus rounds before finishing the job late in the third.

Magnus “Crazy Viking” Andersson did not shy away from the champion, but Petchmorakot was simply too much for the Swedish striker.

The Thai star landed a precise left straight that rocked his foe, and although he was able to answer the referee’s count, Petchmorakot finished the job shortly after with another left straight to retain the gold.

In a bantamweight kickboxing affair, Capitan Petchyindee Academy scored the fastest ONE Super Series knockout in ONE history with a seven-second KO against Petchtanong Petchfergus.

A blistering straight-right hand came down the center and immediately put Petchtanong on the canvas. The KO will be on highlight reels for years to come, and it should elevate Capitan in the stacked bantamweight division.

Sunisa “Thunderstorm” Srisen got back in the win column with a unanimous decision victory over Rika “Tiny Doll” Ishige. Srisen’s power punches prevented Ishige from finding a home for her striking and was able to defend enough on the ground with strong headlocks to avoid bad positions.

Felipe Lobo and Yurik Davtyan got the event underway by spurning conventional wisdom and picking up critical upsets in their ONE Super Series contests.

Davtyan opened the event with a second-round knockout over Bangpleenoi Petchyindee Academy. Davtyan rocked Bangpleenoi at the end of the first, and the Thai striker could not fully regain his composure, allowing the Armenian-Russian to close the bout on the outset of the second frame.

Petchmorakot Petchyindee Academy def. Magnus Andersson by KO at 2:57 of the third round

Captain Petchyindee Academy def. Petchtanong Petchfergus by KO at 0:06 of the first round

Yurik Davtyan def. Bangpleenoi Petchyindee Academy by KO at 0:07 of the second round