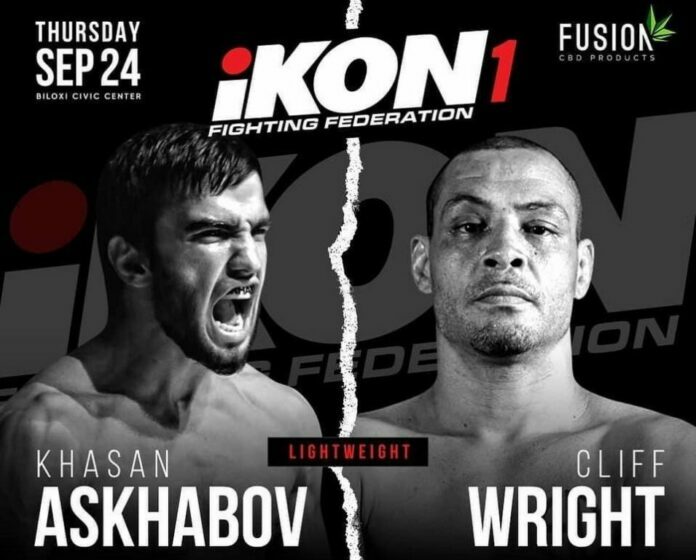 iKON had a very successful debut last night in Biloxi Mississippi. The young promotion put on four amateur fights on their prelims and a seven-fight main card. Today we will be giving out a general recap of iKON 1.

The Main Event Of iKON 1

Khasan Askhabov was able to get a submission win over Cliff Wright in the main event. Askhabov had a lot of hype going into the fight and he delivered with what looked like an easy submission win. This win pushes the American Top Team prospect to 21-2 in his MMA career.

Johnny Parsons With The Upset

Johnny Parsons came into his fight with Tyler Hill as the underdog. Hill is a guy who has competed on Dana White’s Contender Series before. He has fought guys such as Dwight Grant and Brok Weaver in his 15 fight pro career. None of that meant anything to Syndicate MMA’s striking coach, Johnny Parsons. As he delivered a vicious TKO about midway through the first round.

Christian Lohsen showed everyone why Dana White brought him onto the contender series. With a very dominant unanimous decision win over Dennis Hughes at iKON 1. Lohsen was able to control most of the fight on the ground and was able to showcase his jiu-jitsu skills. Lohsen is a lightweight that stands at 6’2″ tall. If he keeps fighting the way he did last night, it’s only a matter of time until Dana White gives him another shot.

AJ Cunningham won a unanimous decision over Jewel Scott at iKON 1. In a fight that was viewed by many to be the fight of the night. Both men threw everything and the kitchen sink at each other, but it was Cunningham that was able to land the more effective shots. Neither man gave up as they were swinging for the fences until the final bell.

SD Dumas def. Clarence Brown via submission (rear-naked choke) 2:53 of the first round.

Allan St-Gelais def. Ravon Baxter via TKO 2:12 of the second round.

Johnny Parsons def. Tyler Hill via TKO (punches) 2:35 of the first round.

Khasan Askhabov def. Cliff Wright via submission (rear-naked choke) 2:24 of the second round.