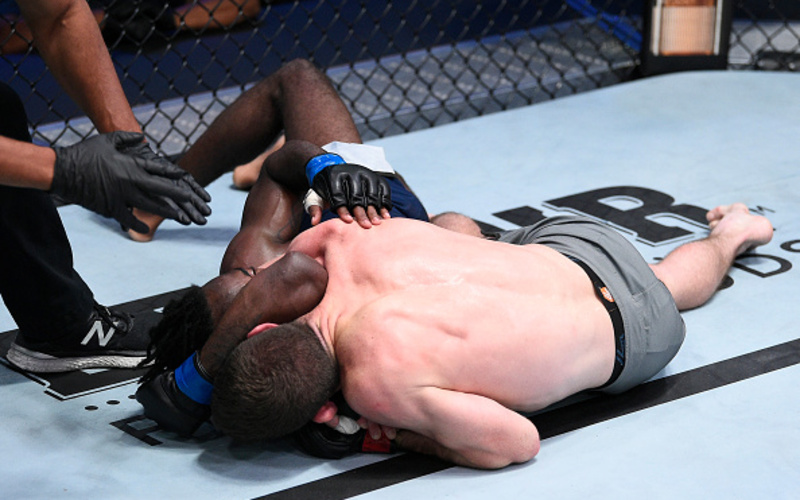 This week on Chaos MMA we had on Jimmy “The Brick” Flick. Jimmy Flick has just signed a new contract with the UFC and will be making his debut on December 5th, 2020 in Las Vegas against Cody Durden.

Jimmy Flick is a flyweight fighting out of The United States. He is 30 years of age and currently trains with Forza Combat Sports located in Oklahoma. Flick is 5’ 7” and has an impressive record of 15-5-0. He has a very good ground and Brazilian Jiu-Jitsu game. 13 of his 15 wins are by submission. Jimmy Flick is coming off a win on Dana White’s Contender Series after submitting opponent Nate Smith with a beautiful arm triangle in the middle of the third round. That submission won Jimmy Flick a UFC contract from Dana White on the contender series.

In the interview we had With Flick he talks about how he has worked his whole life to get a contract with the UFC and how proud he is. Check out what he has to say about that and more in the interview below!

Jimmy Flick dominated Nate Smith for three rounds and we asked him, is that how he saw the fight playing out. His response was, “Most definitely, I’m a grinder and I love the pressure. I love to do damage and go for the finish. He was a good wrestler and I thought he would fight me off a little more. I was excited about my performance”. Jimmy Flick expected the fight to play out like it did and he was very happy with his performance.

Another thing we asked him as if he was surprised Nate didn’t tap earlier because he had him in many submissions and some of them looked very tight. His response was simple, “Yeah I was very surprised. I tried to break his arm a couple of times and he gurgled multiple times.” He added, “I think that’s what wore him down and made him tired. I was able to wear on him and get that finish in the third round”.  He had Nate Smith in a lot of tight submissions and then he finally finished him in the third round.

Another thing we asked him was what it was like sitting there with all the other contender series winners and hearing Dana White say you’re in the UFC. This was his response. “It was crazy. It’s so hard to explain. I have been a professional for ten years, so it took me a long time to get there. Three weeks after the fight, I’m still trying to take it in. I just went out to eat with my family and people noticed me. It’s a dream come true.”

Getting the UFC contract means so much to Jimmy Flick and he’s very excited to make his debut. One of the things he told us in the interview is he’s trying to be very active and fight a lot. It was really great interviewing Jimmy Flick and we can’t wait for his UFC debut on December 5!