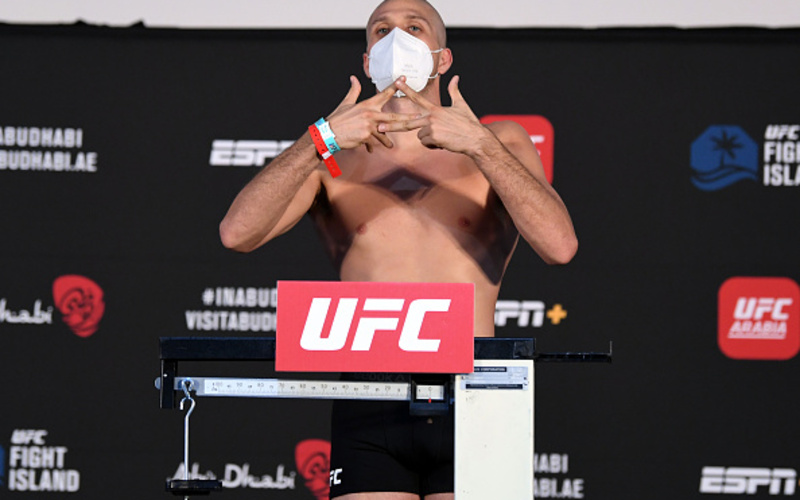 Missed any MMA News today? No worries, we at MMASucka have you covered. We have the UFC on ESPN+ 38 weigh-in results, fighter replacements and call-outs.

The final Fight Night card of this series on Fight Island goes down this weekend when Brian Ortega takes on Chan Sung Jung in a number one contenders fight at featherweight.

In the co-main event, former title contender Katlyn Chookagian looks to continue her journey back to a championship fight when she welcomes weight-class newcomer and former strawweight champion, Jessica Andrade to 125lbs. Following back-to-back losses at 115lbs, Andrade looks to get back to winning ways.

All fighters on the card made weight, with one surprise in-particular. The famous hair of T-City, Brian Ortega has gone. The Californian surprised everyone when he took off his cap to reveal his shaven head at the weigh-ins. He will be donating it to charity after the fight.

Brian Ortega (@BrianTcity) is donating the hair he shaved ahead of today’s weigh-in to Locks of Love for children undergoing chemotherapy, per his manager Tiki Ghosn 👌👌 pic.twitter.com/rKtBu0B0pf

‘Lucky’ Lauren Murphy has been on a tear as of late. With three back to back victories and with five now in the flyweight division, Murphy was set to face Cynthia Calvillo at UFC 254 in a pivotal flyweight contest. It was announced, however, that Calvillo had been removed from the bout and that the UFC were looking for a replacement. Murphy will certainly be keeping an eye on the co-main event of UFC on ESPN+ 38 as it could produce her next opponent.

No. 3 ranked UFC flyweight Cynthia Calvillo (@cyn_calvillo) has been pulled from her fight against Lauren Murphy at UFC 254 next week, per sources. UFC looking for a replacement.

The replacement comes in the form of a promotional newcomer, Uzbekistan’s Liliya Shakirova. Shakirova is 8-1 in her professional career and has fought in promotions including Fight Nights Global. Shakirova was last in action last October when she defeated 1-1 flyweight, Aygul Kuzu Abduvakhid.

If you haven’t heard of Khamzat Chimaev, where have you been? The fighter of 2020 so far has been calling out everyone from 170lbs up to 185lbs. 3-0 in the UFC within just two months of signing for the promotion, Chimaev is an avoided man at both welterweight and middleweight.

We recently asked, who is next for Chimaev, yet we might have found the answer. Former middleweight champion, Chris Weidman called for a fight with Chimaev in January. Taking to Twitter, Weidman claimed that Chimaev ‘needs humbling’ and that he wants to be the one who does it.

This guy Chimeav needs some humbling would love to do that. January I'm in! @ufc make this happen.

Since losing his title to Luke Rockhold in 2015, Weidman has had a torrid time of it. 2-4 since that bout, with a win in his most recent bout, Weidman is looking to go on another run towards the title. A win for Chimaev over Weidman would certainly catapult him into the rankings and possibly even the title picture.

Whether this one goes ahead or not, it’s exciting. Few are calling for Chimaev and we have to respect Weidman for doing so.