Paulo Costa States UFC 253 Headliner Should Have been Postponed 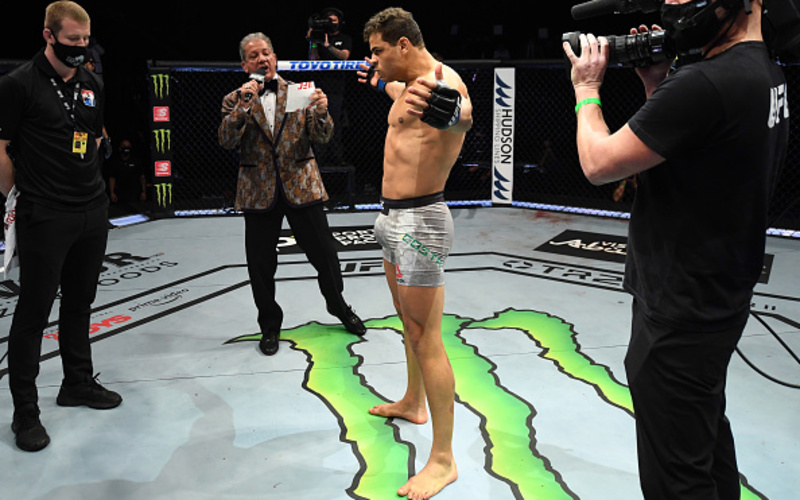 ‘Borrachinha’, Paulo Costa challenged for the middleweight title at UFC 253. Unfortunately for him, it certainly didn’t go to plan. Dominated throughout the whole bout, his opponent, Israel Adesanya proved that on the day, he was the better fighter. Handing Costa his first professional loss, Adesanya brutalised Costa’s legs, bust him open with a well-timed head kick and was able to get the TKO finish in the second round.

A little over a month from the fight, Paulo Costa has come out with a number of claims as to the reason he lost the bout. Admittedly, immediately after the bout, Costa did call for a rematch, claiming ‘something happened’ prior to the fight.

On a live stream on his Youtube account, Paulo Costa claimed that he had a leg injury going into the fight at UFC 253. He also stated that the bout should have been postponed. He didn’t go into detail on the leg injury suffered, how severe it was or what caused it.

On the stream he also claimed that he had ‘no sleep’ the night prior to the bout, affecting his performance. He made comparisons between his situation and Bellator‘s, Patricky Freire. Freire was scheduled to compete at Bellator 249. On the day of the event, he woke up feeling dizzy and not feeling 100%. Later on, Freire was diagnosed with Labyrinthitis, a condition that affects balance. To withdraw from his Bellator 249 bout was certainly the correct decision for the Brazillian.

What’s next for Costa?

Will Paulo Costa get the immediate rematch with Israel Adesanya? In a word, no. It looks as though the current 185lbs champion will step up to 205lbs to challenge for the belt there.

So if this is the case, who should Costa fae next? Former champion, Robert Whittaker is the clear #1 contender at 185lbs. Costa claimed on his live stream that he will be focussing on a fight with the Australian next. Will Whittaker take this fight? As of late, Whittaker has liked to stay busy, but it’s certainly a risk. Costa was flawless in his professional MMA career until he ran into Adesanya. The heavy-hitting Brazillian is still a huge threat at middleweight. If Whittaker was to lose to Costa, it would set him back, despite being the clear next challenger at middleweight.

Whatever is next for Costa, whether he waits for Adesanya to return to 185lbs, faces Robert Whittaker or even faces the winner of Darren Till and Jack Hermansson, Borrachinha is still a threat at middleweight.