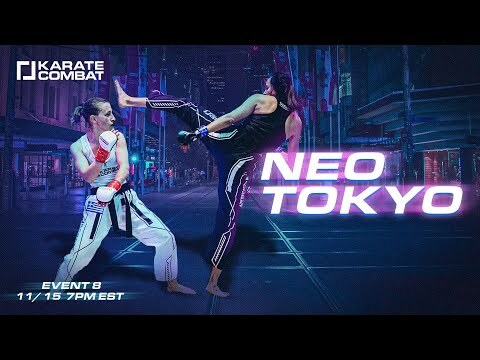 We have your Karate Combat: Neo-Tokyo 2 results. The eighth card of the second season of the retro-futuristic karate championship, Karate Combat, will feature two fights. The card will be televised today on November 15th. The event was previously recorded in an unknown location.

The main event is a Women’s Flyweight clash. Mexican Shito-Ryu stylist Esquivel “La Parkita” Gonzalez will lock horns with debuting Greek Shotokan practitioner Christina “Panthera” Kavakopoulou. Both will be trying to claim their first victory in the karate promotion. Gonzalez will be trying to bounce back from a TKO loss to Sarah Ait Ibrahim while Kavakopoulou will have to overcome a significant height and reach disadvantage.

The heavyweight co-main event will see an all-Shotokan battle as undefeated Moroccan fighter Achraf “The Wolf” Ouchen goes up against Belarusian combatant Andrei “The Warrior of Light” Grinevich. Ouchen comes off of a TKO victory over Franklin Mina at Karate Combat: Olympus. A third victory for Ouchen might prove important when Karate Combat looks for participants in its first heavyweight title bout. However, Grinevich will have every opportunity to defeat Ouchen and steal some shine for himself.