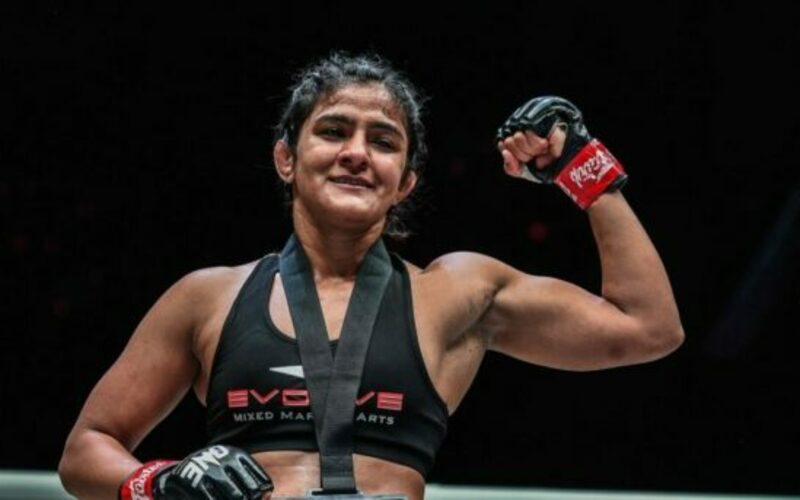 While 2020 has been a challenging year for many, Ritu Phogat has been able to find a way to stay active and position herself for a big 2021. But before she can turn the calendar, Jomary Torres awaits her at ONE: Big Bang on Friday, December 4.

As the daughter of one of India’s most well-known sports families, having their own Disney movie Dangal, the eyes of a nation were upon her from the start.

She followed in her sister’s footsteps in wrestling and took home the 2016 Commonwealth Games gold medal, but instead of looking forward toward the Olympics, she chose mixed martial arts.

To spurn the Olympics and choose her own path was not an easy decision, and it left her searching for the right place to hone her new skills.

Phogat decided to train at Evolve MMA and made her highly anticipated debut in November 2019.

The atomweight has been dominant in her career’s early stages as she continually adds to her arsenal.

Another big performance in Singapore from Phogat will push her closer to the ONE athlete rankings for 2021.

Torres is yet another step-up in competition for “The Indian Tigress.” A four-year veteran of ONE who has shown her own toughness and evolution as an athlete. The Filipina has gone the distance with some of the division’s top talent and holds a submission win over Rika Ishige.

As ONE Atomweight World Champion Angela Lee sits atop the division, she is being chased by Denice Zamboanga, Meng Bo, and others. Phogat is looking to breakthrough and announce herself as a title contender sooner rather than later.

There is no better time to do just that. Lee is currently watching the action from afar as she prepares to welcome a new addition to her family, which is allowing the division’s top athletes to state their case for the upcoming year.

Zamboanga continued her undefeated streak in August with a first-round submission. Meng Bo delivered another stunning first-round knockout in November. Stamp Fairtex continued her own evolution as a mixed martial arts athlete and stayed perfect with two bouts in 2020.

In the atomweight chase, Phogat’s activity, wrestling credentials, continual evolution, and dominant performances are pushing her up the ranks rapidly. While she sits outside the current rankings, she is not too far off the pace.

An emphatic end to 2020 can keep the hype building around one of the top athletes to transition into mixed martial arts in recent memory.