It was announced in November that Paige VanZant will be making her Bare Knuckle Fighting Championship debut on February 5th. BKFC just announced that her opponent will be none other than Britain Hart.

Britain Hart has a professional boxing record of 4-4-3. With two knockouts and her last boxing match being in August of 2020. She is 1-2 in her BKFC career. She has a split decision loss to Bec Rawlings, a doctor stoppage loss to Christine Ferea, and a TKO win over Radine Elkholm. The win over Elkholm was her most recent appearance, coming this past November. Hart will be coming into the fight looking to make a statement against one of BKFC’s biggest signings.

Paige VanZant will be making her BKFC debut on February 5th. After going 5-4 inside the UFC octagon. VanZant and Hart actually have a common opponent in Bec Rawlings. PVZ didn’t get to fight Rawlings in BKFC but she did knock her out in their 2016 UFC bout. PVZ held a professional MMA record of 8-5. She has never been knocked out in her career and has two career knockout victories.

A lot of fans thought that PVZ would join her husband, Austin Vanderford in Bellator when she left the UFC. It was a surprise to all when she signed with BKFC. She will have a tough road ahead of her as BKFC has a lot of talented female fighters on their roster.

It is going to be hard to determine just how good Paige VanZant will be in BKFC. She has never fought under boxing rules and has definitely never fought under bare knuckle rules. Hart, on the other hand, has three fights worth of experience fighting bare knuckle. PVZ seems like she is the better striker based off what we seen in her UFC career. We will just have to wait and see how that translates to BKFC.

At the end of the day this fight seems like it is going to be a banger. Both women have a lot of pressure on their shoulders to make statement with this fight. PVZ needs to make a great impression in her debut, and Hart needs to impress BKFC brass by beating one of the most hyped up signings in BKFC history.

BKFC 16 will take place in Tampa Bay, Florida on Super Bowl Weekend. Tickets are not on sale just yet. Fans can watch this event on Bare Knuckle TV. 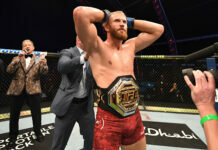