The much-anticipated main event for UFC 257 featured a rematch years in the making between former interim UFC lightweight champion Dustin Poirier and the biggest star in UFC history Conor McGregor. They each have taken very different paths to get to this point, with McGregor skyrocketing into superstardom after his September 2014 finish of Poirier. “The Diamond” Poirier, meanwhile, went back to the drawing board, moving to lightweight and slowly working his way up the rankings in a new division.

With current lightweight champion Khabib Nurmagomedov supposedly watching closely, the winner puts themselves in a prime position to either become champion if Nurmagomedov vacates the title or a rematch with him if “The Eagle” decides to return to fighting.

After a short feeling out process, Poirier landed a takedown less than a minute into the fight. McGregor got up quickly and spent a lot of time in the clinch, where McGregor landed some shoulder strikes that he showcased in his previous fight. Once the clinch was broken, McGregor mostly control the striking in the first round, but Poirier found his rhythm late in the round.

In the second round, Poirier came out heavily attacking McGregor’s leg. The effects quickly took its toll, and the sting on McGregor’s punches diminished heavily. Poirier began walking through the punches and landed heavy shots of his own. They eventually began to tag the Irishman, and then a Poirier flurry put him down and out.

Dustin Poirier def. Conor McGregor via TKO (strikes), 2:32 of Round 2

The loss moves McGregor to 3-3 in his last six fights. The rubber match with Nate Diaz seems like a good option at this point for him. Poirier, meanwhile, declared himself the undisputed champion in the post-fight interview. If Nurmagomedov truly is retired, he could very well find himself fighting for that opportunity at the very least. 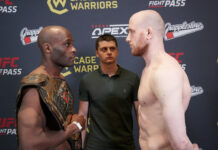