Derrick Lewis and Curtis Blaydes analysis is hard to do because it really is just an encapsulation of the heavyweight division as a whole. The fight is demonstrably one-sided, with Derrick Lewis (25-7) only landing about three significant strikes within the first eight minutes. Then suddenly Blaydes is unconscious and needs to be saved by the vigilant Herb Dean. But hey, that’s heavyweight MMA for you, all it takes is one mistake for your night to be over.

Blaydes vs Lewis analysis should be done thusly, Curtis Blaydes (14-3) looked really good, until he didn’t, and Derek Lewis didn’t really look great at all. That being said, Lewis has a number of features that mean he will be a force in the division for a while. The first and most obvious is his world-shattering power, next, and slightly less obvious is his grit and determination.

In order to beat Lewis you really have to beat him. It’s rare for a heavyweight to be able to endure punishment and stay in the fight. Usually, if momentum is going one way, it’ll go that way until one guy is unconscious or both get tired and start fence grappling. Lewis’s last and probably most important asset is his self-awareness. In a sport where it is almost a requirement for you to be delusional if you want to make it to the highest levels, Lewis seems acutely aware of his strengths and weaknesses. This means he doesn’t convince himself he can do something he can’t and vice versa.

Blaydes’s performance in this fight was really great, he was using good movement back and forth to keep his way out of the counters and keep Lewis thinking about the inevitable takedown. He used his jab well and mixed it up in the pocket. His elbows in the clinch seemed earth-shattering and Lewis must be as tough as they come for taking all of that. Blaydes also made great use of leg kicks to punish Lewis every time he moved back.

Lewis was looking to counter with a big right hand every time Blaydes came in. A couple of times he connected, and once had Blaydes worried. After a single eye poke, it also seemed that Lewis was quite sensitive about them, pausing at one point to complain about a poke that was clearly a jab. Lewis also made good use of kicks to defuse Blaydes’ pressure. Unfortunately, we did not get to see much of a grappling match, as Lewis stuffed Blayde’s first shot and the second ultimately leading to the fight-ending sequence.

This leads us to the mistake Blaydes made, and the current whole in his game that probably needs addressing if he ever wants to beat guys like Lewis or Ngannou. Blaydes is a solid striker and a great wrestler, but he’s unable to use them in transition. It seems clear that he is either striking or he’s wrestling, not doing both. What this means is that he can often telegraph his shots, and if his opponent has enough power to make him pay for it, like Derrick Lewis or Francis Ngannou (15-3), then that can be the end of the fight for Blaydes.

Blaydes vs Lewis analysis on the fight-ending sequence is straightforward, Blaydes clearly seemed a bit uncomfortable after the reset and moved to get a takedown. Not only had Lewis been clearly preparing for Blaydes to shoot, but the shot itself was quite lazy and from far out, this made countering quite easy and Lewis did just that.

The fight was pure heavyweight MMA and goes to show that not even the top fighters in the division are immune to it. 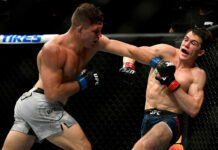