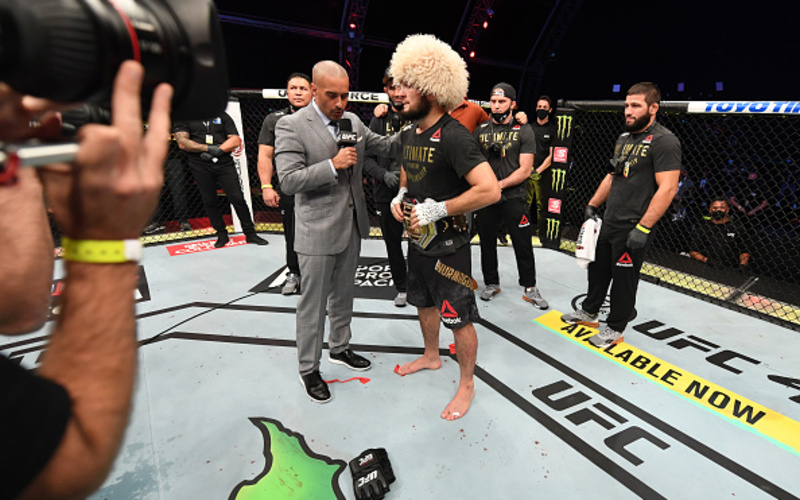 Despite his decision to retire from the sport, we have placed Khabib in the number one spot for now. He is 29-0, we are uncertain whether he will return to the cage, but have seen that he is arguably one of the most talented men to ever enter the octagon. He is coming off a second-round submission victory against Justin Gaethje at UFC 254.

Usman has been called ‘boring’ at times, however, after his last three performances, specifically his most recent, that statement should never cross your mind again. The 18-1 fighter has defeated everyone that has stood in front of him in his UFC career. He holds the record for welterweight wins in a row and has shown growth after each and every fight. Most recently, Usman defeated Gilbert Burns via second-round TKO at UFC 258.

Another undefeated fighter, Israel Adesanya made the transition from kickboxing to MMA extremely smooth. He has beaten some serious names in the UFC middleweight division, including obliterating Paulo Costa in his most recent outing at UFC 253. The 31-year-old will now look to capture the light heavyweight championship, as he faces Jan Błachowicz at UFC 259.

Dustin Poirier has become one of the most complete mixed martial artists on the planet. In his last outing, he defeated Conor McGregor in a star-making performance. Poirier has built himself through hard work and dedication and now is finally receiving the respect he’s worked hard to achieve. His lone defeat in the past four years is against Khabib Nurmagomedov.

The fact that Amanda Nunes is on this list speaks to how amazing a fighter she’s become. She’s a multi-weight champion and has dispatched all former champions in dramatic fashion. She holds stoppage victories over a who’s who of MMA. That list includes Valentina Shevchenko (twice), Miesha Tate, Ronda Rousey, Holly Holm, Germaine de Randamie, and Cris Cyborg. Bananas.

Deiveson Figueiredo has always been a tremendously gifted fighter. That said, he seems to have really made strides in the past couple of years to take things to the next level. Back-to-back victories over Joe Benevidez really established him as a champion. He dispatched Alex Perez in the first round of their clash, and fought in one of the best fights in recent memory, earning a draw against Brandon Moreno.

This guy doesn’t get near the credit he deserves for what he’s done in the UFC. He hasn’t lost a fight since 2013 and during his current run in the UFC, he’s defeated the likes of Max Holloway (twice), Jose Aldo, and Chad Mendes. He is an absolute beast and his leg kicks are out of the world. If he continues to defend his title he will undoubtedly climb this list and find himself among the elite.

Jon Jones is a mainstay on the list, and despite his recent lackluster performances until he officially loses, he belongs here. He is currently making the move to heavyweight, which will be really interesting. He’s always displayed a solid chin, and at heavyweight, his speed could cause a lot of problems for the bigger guys. Jones is controversial, but none of that can take away from his abilities as a fighter.

Max Holloway is an amazing fighter with an incredible heart. He simply refuses to step back in a fight and pressures nonstop. That said, he’s also very popular due to his personality and how genuine he is to fans. A lot of people felt Holloway won his rematch with Alexander Volkanovski but he will undoubtedly be back. He has wins over Jose Aldo, Frankie Edgar, Bryan Ortega, Anthony Pettis and had a record-setting performance against Calvin Kattar in his last fight. Max is the man!

Petr Yan is a dangerous fighter who is on quite a roll currently. He has beaten the likes of Urijah Faber, John Dodson, Jimmie Rivera, and Jose Aldo. He’s currently the UFC bantamweight champion and faces off with Aljamain Sterling next month at UFC 259. If Yan can defeat “Aljo”, he’ll solidify himself on this list and prove he’s deserving.

There you have the first MMA Sucka Live Pound for Pound Rankings, let us know what you think.