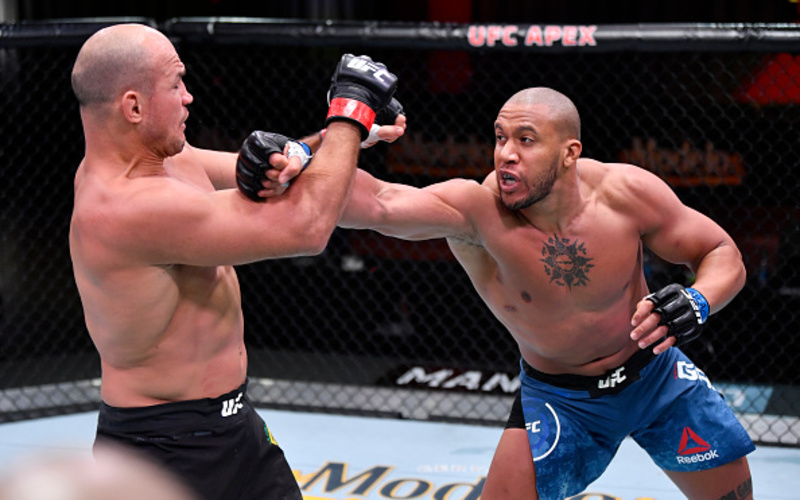 UFC Vegas 20 is headlined by a heavyweight clash between Jairzinho Rozenstruik and the surging Ciryl Gane. Whoever wins will be poised to fight the winner of Stipe Miocic and Francis Ngannou, unless Jon Jones makes his long-awaited heavyweight debut. The card is stacked with solid matchups, so here are some UFC Vegas 20 betting tips to help you win big this weekend.

Jimmie Rivera to win via decision (+100)

Jimmie Rivera (23-4) was originally set to fight Pedro Munhoz (18-5-1NC) at UFC 258, however, due to a positive Covid-19 test, the fight was rescheduled. In a fight with title implications, both men will be seeking to make a statement in the bantamweight division.

Considering both men are elite strikers, they are significant stylistic differences between the two. Pedro Munhoz makes his first appearance after losing a razor-tight decision to ex-lightweight champion Frankie Edgar. The Brazillian possesses legitimate one-punch knockout power, as he showed when he nearly decapitated Cody Garbrandt. In this contest, Munhoz will be best served to utilize his bruising calf kicks in order to reduce Rivera’s movement. Munhoz’s path to victory lies in creating frenzied exchanges and dragging Rivera into a war where he can show off his iron chin and heavy hands.

Jimmie Rivera is the more polished striker and if Munhoz fights like a bull, Rivera can play the part of a matador. Asserting a crazy pace on the feet whilst mixing in effective clinch-work and takedowns makes Rivera a problem for anybody in the division. As a sharp-counter puncher, Rivera shall make Munhoz pay for any lapses in concentration. Rivera should work the body in order to slow his opponent down, then look for takedowns in the later rounds.

Although the bout stylistically plays to Rivera’s strengths, he hasn’t finished a fight in nearly six years. When the pair first fought in 2015, Rivera was able to win by a tight decision. Based on their respective career trajectories he should be able to do so again, and therefore is the top pick of these UFC Vegas 20 betting tips.

Ramazan Kuramagomedov (8-0) makes his promotional debut against the veteran Alex Oliveira (22-9-1). Kuramagomedov failed to gain a contract on his “Contender Series” debut and will be looking to show the UFC what they missed out on against “Cowboy”.

Alex Olivera has had a tough time as of late, losing four of his last six bouts. Age seems to be catching up with the Brazillian, but he still has the tools to cause the young prospect significant problems. Olivera will likely aim to keep the bout as low-action as possible. As he doesn’t favor volume striking, Olivera would be best served to try and take Kuramagomedov down and wear on him to try and do more significant damage in the later rounds. Kuramagomedov showed suspect cardio against Jordan Williams and Olivera should do his best to exploit this potential weakness in his opponent.

However, apart from a few minor chinks in his armor, Kuramagomedov looks the real deal. Kuramagomedov is incredibly well rounded and is an excellent kicker. If Olivera doesn’t gain his respect early and disrupts his flow, Kuramagomedov will look to mix in calf and high kicks in order to systematically break Olivera down. The Dagestani has a diverse skill set and if the striking doesn’t tickle his fancy, he will gracefully change levels and utilize his strong wrestling and dangerous submissions.

The reality is that most attributes are on the debutants’ side. Kuramagomedov could dominate in all aspects of the fight, and Olivera’s best hopes lie in imposing his physicality and sucking the energy out of his opponent. He has a chance of doing so, especially considering Kuramagomedov’s inactivity as of late. However, on balance, Kuramagomedov represents excellent value for these UFC Vegas 20 betting tips and should be a major player in the UFC for many years to come.

Stay tuned right here at MMA Sucka for more live streams as well as videos highlighting the top fighters, commentators, coaches, promoters, and other names in MMA and combat sports. We also bring you great offers on the latest MMA products and merchandise. You can also subscribe to our YouTube channel for regular updates and all the latest fight news. You can also check out our sister site, at TheFightBuzz.com for the latest from the world of MMA and other combat sports.
Main Image: