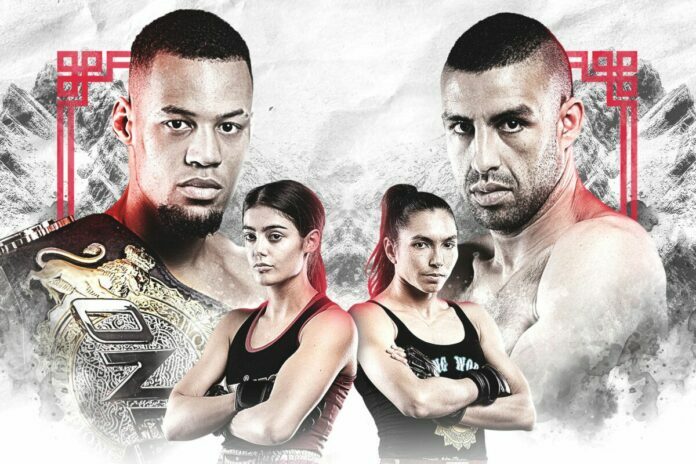 On March 19, ONE Championship will close out their “Fists Of Fury” event series with a six-bout event featuring athletes from 11 countries in a showcase of its global talent.

ONE: Fists of Fury III Preview

ONE: Fists Of Fury III, a previously recorded event from the Singapore Indoor Stadium, will be capped off by two incredible ONE Super Series bouts, including a matchup for the ONE Lightweight Kickboxing World Championship between champion Regian Eersel and Mustapha Haida.

But prior to that title tilt, contenders and rising stars in the mixed martial arts ranks will try to steal the show and get their year started with a bang.

Kicking-off the show will be Yodkaikaew Fairtex and Hu Yong. The Chinese athlete has looked sensational on the ONE Hero Series scene with four-straight victories, but he makes his main roster debut against one of the hottest fighters in Asia.

Fairtex has posted three-consecutive victories on the global stage by showing his elite striking and growing grappling defense. The exciting flyweights could be a sleeper for Match of the Night.

The flyweight action continues in the second bout of the night as Roshan Mainam and Aziz Calim battle inside the ONE Circle. Calim has a prime chance to regain his footing in the division, but Mainam will try to make it three-in-a-row to keep his momentum going as he tries to break inside the top five rankings.

#5-ranked strawweight contender Maira Mazar will defend her spot in the ONE athlete rankings against Jenelyn Olsim of The Philippines. Mazar is looking to make it back-to-back victories inside the Circle and make a play at being the next contender for Xiong Jing Nan and the ONE Strawweight World Championship.

A victory by Olsim would crash her party and send the Filipina rising up the ranks.

Silva has been a mainstay in the division, but a new era could be upon the division as Minowa is surging at the right time. The Japanese standout is riding an incredible five-bout win streak into the meeting and is coming off an impressive debut performance against Lito Adiwang.

There will be a lot at stake at ONE: Fists Of Fury III and the matchups are sure to be exciting.