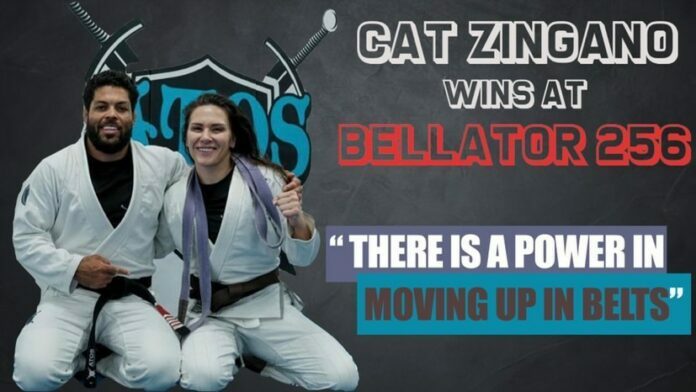 Cat Zingano is looking to become the Alpha Female of the Bellator featherweight division.

Cat Zingano: ‘I am on a run for gold’

She entered Bellator 256 as a -800 favorite and rightfully so — defeating Olivia Parker in the first round by armbar submission. This was her first submission since 2012 against Raquel Pennington. After Zingano embraced her opponent, in the post-fight interview with Mauro Ranallo, she told him that she was on the run for gold.

“I am on a run for gold,” Cat Zingano stated. “I want to go against the best. I know who’s the best, I know these two girls [Cris Cyborg and Leslie Smith] have a fight coming up in a couple months and I’d love to get a shot at the belt over here in Bellator. That would mean a lot to me.”

"I'd love to get a shot at the belt over here in #Bellator."@CatZingano gets the W tonight at #Bellator256.

An OG to WMMA with notable wins over fighters like Raquel Pennington, Miesha Tate, and the G.W.O.A.T– Amanda Nunes, Zingano chose to continue her MMA career in Bellator after being released from the UFC in August of 2019.

From her wrestling pedigree to her brown belt under Andre Galvao, Zingano’s skillset is exceptional. But what’s more impressive? The emotional and mental strength to continue her career at 39 years old, after injuries and traumatic events under the public eye. She displayed her love for the sport when she told Sports Illustrated’s Justin’s Barrasso “This is crazy and intense, but it’s such a thrill. I learn something new about myself every time.”

Zingano was the first woman to win by TKO in the UFC. After years of battles in the cage, she has openly discussed her brain trauma on public platforms like the Joe Rogan Experience podcast. Although Zingano is well-aware of the symptoms and risks of more brain damage, she has been wrestling since she was 12 years old and fighting is part of her identity, which is why she hopes to seal her legacy in gold under the Bellator MMA banner.

What’s next for Alpha Cat Zingano? A fight with Talita Nogueira to determine the #1 contender? Or a title shot against the current champion, Cris Cyborg?