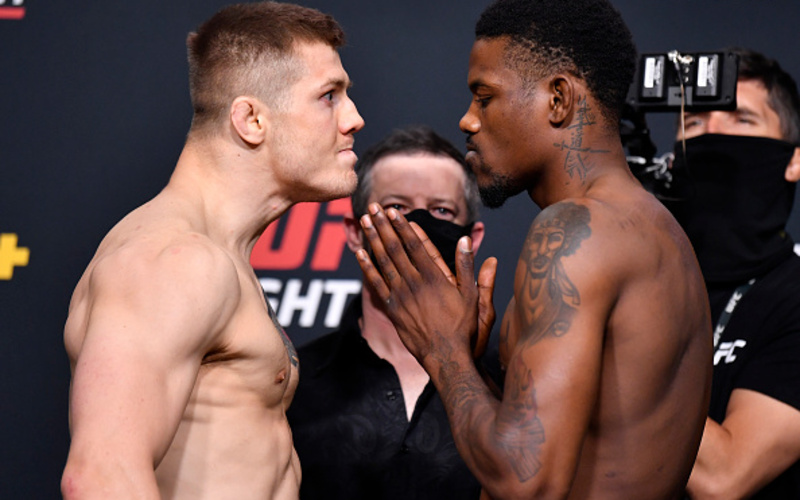 The UFC makes their second appearance on ABC while also debuting their new Venum fight kits as MMASucka provides UFC Vegas 23 results all day. Appearing in his second straight main event, Marvin Vettori will be taking on Kevin Holland, who took this fight on just over a week’s notice. Prior to Holland stepping up, Vettori was slated to faced former welterweight title challenger Darren Till, however Till was forced out of the contest with a broken collarbone.

Entering this fight, Vettori has won his last four straight as he continues his campaign for gold. Had it not been for a number of fight cancellations, Vettori could have very well made it into the top three by now, but that was not how things would work out. When he does step foot into the octagon, he is very good. As stated previously, he has won his last four straight, which includes decision wins over Cezar Ferreira and Andrew Sanchez plus a submission win over Karl Roberson. In his last fight, which was his first main event, Vettori defeated Jack Hermansson by unanimous decision to put him at number six in the division.

As for Holland, this will be his seventh appearance in the octagon since the beginning of 2020. During 2020, Holland put together an undefeated record of 5-0. During that time, he picked up TKO wins over Anthony Hernandez, Joaquin Buckley and Charlie Ontiveros as well as a decision win over Darren Stewart. In his final fight of the year, Holland finished Ronaldo Souza by first round knockout at UFC 256. Following his undefeated 2020, Holland earned a main event spot against Derek Brunson where his win streak would unfortunately be snapped as Brunson defeated him by unanimous decision.

The co-main event of the night will feature a featherweight match up between Arnold Allen and Sodiq Yusuff. Allen enters the fight having won his last nine straight, seven of them being won in the UFC. In his only appearance during 2020, Allen defeated Nik Lentz by unanimous decision to improve his record to 16-1. Taking him on will be Yusuff, who has won his last six straight and also holds an undefeated UFC record of 4-0. He also appeared only one time last year as he defeated Andre Fili by unanimous decision to put his professional record at 11-1.

Kicking off the main card will be a welterweight fight between Mike Perry and Daniel Rodriguez. Each man enters the fight looking for a win as they are both coming off a recent loss. Following that fight will be a women’s strawweight fight between Nina Nunes and MacKenzie Dern. Dern will be looking for her fourth straight win while Nunes will be making her first appearance since her and Amanda Nunes welcomed their first child last year. Finally, prior to the co-main event will be a middleweight fight between Sam Alvey and Julian Marquez. Marquez looks for his second straight win while Alvey has not won a fight since 2018.

Follow along with MMASucka as we provide you with UFC Vegas 23 results throughout the card.

*Bahamondes missed weight at 156.75 pounds and will forfeit 20 percent of his purse.