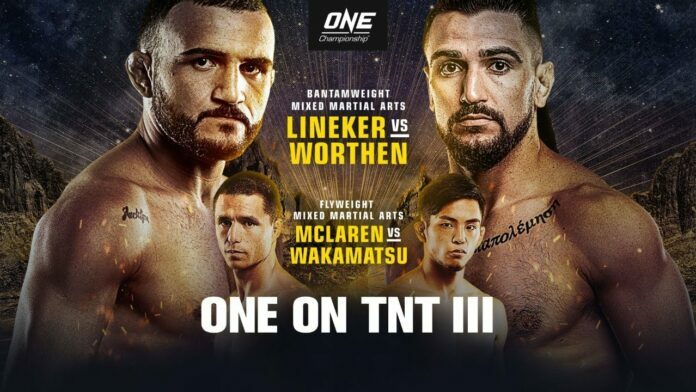 ONE Championship was back at it on Wednesday, April 21, with ONE on TNT III.

3 Things We Learned From ONE on TNT III

The five-bout card for the third installment of their U.S. primetime event series featured contender’s matchups across multiple divisions, and the athletes took advantage of the platform to make their individual cases.

Who made the most noise? Following another night from the Singapore Indoor Stadium, here are three things we learned from ONE on TNT III.

John Lineker Does It Again

John “Hands of Stone” Lineker is known for his punishing body work and immense power. In the main event of ONE on TNT III, he continued to show-off that fan-pleasing style with a first-round knockout over “Pretty Boy” Troy Worthen.

Lineker marched forward continuously digging right and left hooks into the body. Somehow, Worthen ate them and stayed in the pocket. However, that body work forced him to drop his hands over the course of the first round. Finally, Lineker went up top and dropped him before finishing it off with one final shot on the ground.

There may not be a more exciting matchup in 2021 remaining than Lineker vs. Bibiano Fernandes. The Brazilian vs. Brazilian clash is one for the ages.

South Korea’s Ok Rae Yoon made his ONE debut at ONE on TNT III against #5-ranked lightweight contender Marat “Cobra” Gafurov. That, in itself, was a big way to be introduced into the division.

However, prior to ONE on TNT III, the organization made it clear the winner would get a shot at Eddie “The Underground King” Alvarez at ONE on TNT IV. Following an excellent three-round showing in Singapore, Ok has earned that spot.

In a matter of weeks, Ok could go from promotional newcomer to ONE Lightweight World Championship title contender.

Should the South Korean defeat Gafurov and Alvarez back-to-back, in conjunction with Christian “The Warrior” Lee holding wins over the rest of the ranked contenders, ONE would be hard-pressed not to give him that shot.

Wakamatsu May Be Next For Moraes

Adriano “Mikinho” Moraes has a list of contenders waiting for their shot, but after his unanimous decision win at ONE on TNT III, Yuya “Little Piranha” Wakamatsu may be at the top of the list.

While he is not the top-ranked contender, no other contender in the flyweight division has as long of a winning streak than Wakamatsu. The Japanese star picked-up his fourth win with a unanimous decision over Reece “Lightning” McLaren in the co-main event.

Wakamatsu has shown a lot of improvement over the course of his winning streak which should give plenty of reason that he can contend with the king of the division.

Given Wakamatsu and Moraes’ recent victories came on the TNT platform, it makes sense that it would be the next matchup, and there’s no question he has earned that right.