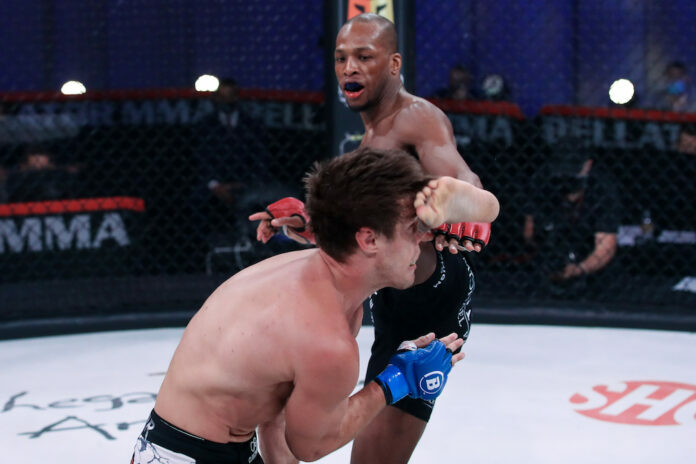 Michael Venom Page drew up a masterful performance against a very tough Derek Anderson on Friday night at Bellator 258. After the first five minutes, Page ended up getting his hand raised for his nineteenth professional victory. Now on a five-fight win streak, the young Britain looks as dangerous as ever.

Does Michal Venom Page Win the Rematch Against Douglas Lima?

At Bellator 221, Michael Venom Page took on Douglas Lima in a semi-final matchup for the Bellator Welterweight World Grand Prix. The co-main event drew the eyes of MMA fans across the globe as many believed that Douglas Lima was the biggest test yet for the thirty-four-year-old Page.

In the first round, Page was competitive with Lima, implementing his awkward, angled style of kickboxing. After two minutes, the fight hit the mat and stalled until the closing, first-round bell.

In round two, Page quickly implemented forward pressure, using a variety of angles, levels, and kicks. Page briefly stumbled Lima with a quick 1-2 and turned up the pressure. While coming straight into his opponent, Page was caught with a low kick that dropped him. Lima then caught Page with a perfect right hand that knocked him out. This loss was the first of his MMA career.

Since the Lima Fight

Page returned to action at Bellator 227 facing Richard Kelly. In an obvious step down in competition, MVP absorbed maybe one strike before he knocked out Kelly with a flying knee. Page entered the cage again at Bellator London 2 where he took on Giovanni Melillo. Page won the fight via knockout, earning back-to-back first-round victories. Just a month later, Page took on Shinsho Anzai in a catchweight contest. Seemingly untouchable, Page earned his third win in four months after finishing Anzai in the second round.

Page would not return to action until October 2020 where he would face Ross Houston at Bellator 248. Page appeared to be the shell of the fighter he was just a year ago, with “cage rust” playing a significant role in his performance. Despite being rough around the edges, the welterweight contender walked away with a unanimous decision victory, his first win by decision since defeating Paul Daley at Bellator 216.

In a highly anticipated matchup, Michael Venom Page opened the main card of Bellator 258 against Derek Anderson in a 175-lb. contest. The pair were scheduled to face each other in 2017 and 2019, but the fight fell through. With serious implications in the welterweight division, both men came out with the intention to knock each other out.

At the sound of the bell, Page quickly emerged as the dominant fighter as he seemingly landed at will. Timing Anderson’s movement and using fluid movement of his own, Page landed a vicious head kick that flattened Anderson’s nose. As the round ended, Page inflicted more damage with precision strikes. The doctor waived off the bout after examining the extent of Anderson’s broken nose, giving Page his fifth consecutive victory. In his post-fight interview, Page cited Jason Jackson as a potential next opponent with the ultimate goal of avenging his only loss in a rematch with Douglas Lima.

Who Wins the Rematch?

Although Douglas Lima may have been the better fighter at Bellator 221, some may argue that the “Phenom” simply ‘caught’ MVP. Page has certainly looked the part of a champion in his last five fights, gaining dominant finishes in four of them. On the other hand, Lima has gone 1-1 since their 2019 fight, defeating Rory MacDonald and losing to Gegard Mousasi. The pair will undoubtedly run it back in the Bellator cage soon. Who do you think will win the rematch?