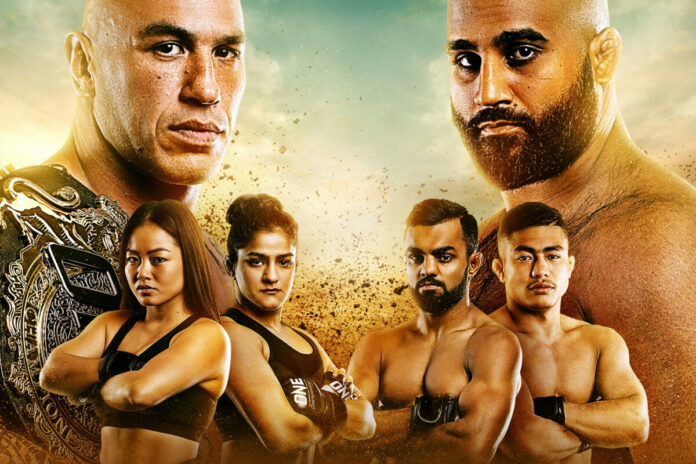 ONE Championship is back at it on Saturday, May 15, with a five-bout event featuring incredible martial artists and a World Championship battle leading the way.

The evening will start with rising stars looking to make an impact before advancing to contenders wanting to state their case for a shot at their respective division’s titles. And then, it’s the ONE Heavyweight World Championship showdown.

Before the fireworks begin, let’s highlight three things you absolutely need to watch from ONE: Dangal this weekend.

The main event features a massive matchup for the ONE Heavyweight World Championship. The dominant king, Brandon “The Truth” Vera, has knocked out every heavyweight he has faced in ONE and has ruled the division since 2015.

Enter Arjan “Singh” Bhullar. The talented Candian-Indian grappler looked dominant in his ONE debut against Mauro Cerilli, and now he has a chance to become India’s first World Champion in mixed martial arts.

Vera’s well-rounded game and athleticism will prove to be a tough challenge for the American Kickboxing Academy athlete. However, Vera will have to contend with one of the division’s best wrestlers.

Everything about this match is compelling. The styles of both men virtually promise an exciting bout. The storyline of India searching for its first World Champion and Bhullar seeking to be that man, but Vera’s run of knockouts at heavyweight is equally as important. This is a can’t-miss affair.

Ritu “The Indian Tigress” Phogat is slated to take on Meng Bo in the quarter-finals of the ONE Atomweight World Grand Prix on Friday, May 28. However, she has accepted a bout with Bi “Killer Bee” Nguyen ahead of that matchup, putting her spot on the line.

There is something to be commended about taking such a risk. Phogat’s incredible grappling strength makes her a legitimate threat to take down the Grand Prix title and become the top contender for the ONE Atomweight World Championship.

Nguyen has had some fun matchups that have shown her grit and determination. She will not enter the contest without believing she can win, and she wants to prove that she should have been included in the tournament.

There is a lot on the line in this atomweight affair. Can Phogat keep her spot, or will the risk not see its reward?

ONE: Dangal is a feature for some of the top Indian stars of martial arts, and in the opening contest of the event, two of the rising flyweights will square-off inside the Circle.

Gurdarshan “Saint Lion” Mangat has looked solid in his appearances, but he is coming off a loss to Reece McLaren. He will be attempting to get back in the win column at the expense of the fastest-rising flyweight in the division.

Roshan Mainam has not just been impressive in his outings in ONE. He has looked the part of a contender with submission victories in each of his bouts. He will test Mangat’s grappling defense and try to push his way into the official ONE athlete rankings.

Which Indian star can take the next step in a stacked flyweight division? We’ll find out right from the get-go as it will be the first bout of the evening.