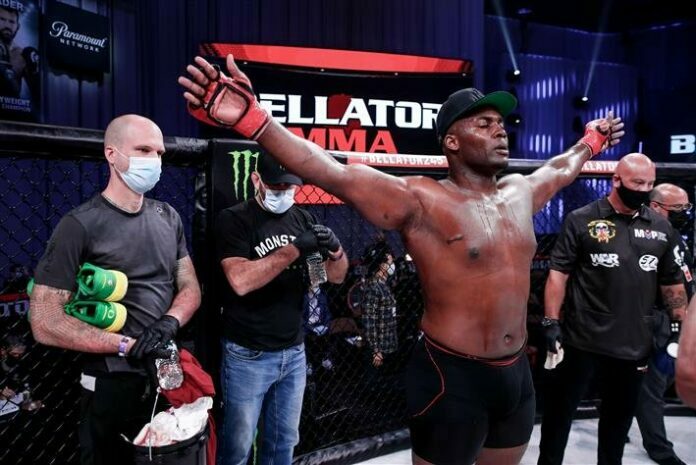 Davion Franklin sat down with MMASucka.com last week, after a sparring session, to discuss his upcoming bout at Bellator 259, what his goals are, and who he looks up to.

Goals and Greatness with Davion Franklin

“All Day” Davion Franklin lists all-time greats Jon Jones and Mike Tyson as two combat sports athletes he most looks up to. But, looking beyond just those two he begins to tell us he’s grown into one of his favorites. “Jon Jones, of course, which is one of my homies too. And Mike Tyson. ” Franklin, Bellator Heavyweight, trains with Jones at the Jackson-Winkeljohn Academy. He continues, “Those two are the guys who inspired me the most. And just Jon Jones still inspires me a lot.” Franklin also includes himself as one of his favorites, “Those are my two of my favorite combat athletes. But now that I’m coming into my own, I’ve become a combatant, I’m my favorite, I’m my own favorite now.”

When you look up to greats such as Jon Jones and Mike Tyson one is bound is set extremely lofty goals, and to this end, Davion Franklin is no exception. “My career has gone how it’s gone, so far,” Franklin continues during our interview, “I want to be great at it. That’s what’s keeping me around because I want to be the greatest heavyweight of all time.” Davion Franklin has set his own goals as just being another good MMA fighter but instead he is aiming to be the greatest heavyweight fighter of all time.

On MMA, Motivation, and Booker T

It was not a clear path for Davion Franklin to find MMA. A promising young athlete who says he did not know that he could be great. He tried a small stint in professional wrestling and collegiate football before beginning training in MMA, the young 26-year-old fighter says. “My motivation and my motives have changed. Before I came to this sport I was kind of in a rough patch in my life. I did the college football had a little stint with the professional wrestling for a little bit and even college wrestling too. And I just knew I could still be a great athlete. I knew I still had a lot of athletic potential and I just didn’t know where to go.”

Franklin even had a small trial with the WWE and training with Booker T. “Growing up I watched a lot of professional wrestling. I got recruited by Jared Briscoe my Freshman year of college when I was wrestling. I made it to the national tournament and it was in Spokane, Washington, and Jerry Briscoe kind of recruited me. After I was done playing college football I decided to give it a shot. He sent me to Texas to work with Booker T, but that didn’t really go so well. That was basically that and I had a little try-out at the Performance Center in Orlando.” Some of his’ wrestling idols were of the early 2000’s era. “Growing up I’ve always liked Bautista, I like Goldberg, I like Kane, Randy Orton.“

Ahead of Davion Franklin’s Bellator 259 bout he still can find inspiration in hip-hop artists. Philadelphia-born rapper Meek Mill has a particular amount of respect for Franklin due to standing up for something. He tells us, “Meek Mill, I like what he stands for. Dream Chasers. Just a guy coming from an underprivileged area and having to fight his way to make it in his world. You got to respect that.”

The issues Meek Mill stands for strike a familial familiarity with Davion Franklin, “Meek Mill he’s special, man. He’s in prison reform, he’s helping a lot of guys who got wrongfully convicted to get out of prison. I have an uncle who went to jail for 22-years of his life for a murder he didn’t commit. He just got out a couple of years back, so I respect that.”

Last December Davion Franklin had a scheduled bout that was canceled, so he’s hungry to get back in the Bellator cage. “All Day” Davion Franklin (2-0) will be facing Tyler King (12-9) at Bellator 259 this Friday, May 21, 2021.

Regarding his upcoming bout, he says, “Training’s been really, really good. Just focus on keeping the same, keeping a good pace. And that’s really it, honestly. Everything else falls into place…Hopefully, Tyler King, he comes ready. He won’t be like my last opponent and pull out, for whatever reason. I look forward to going out there, and getting a W, in the most respectful way.”