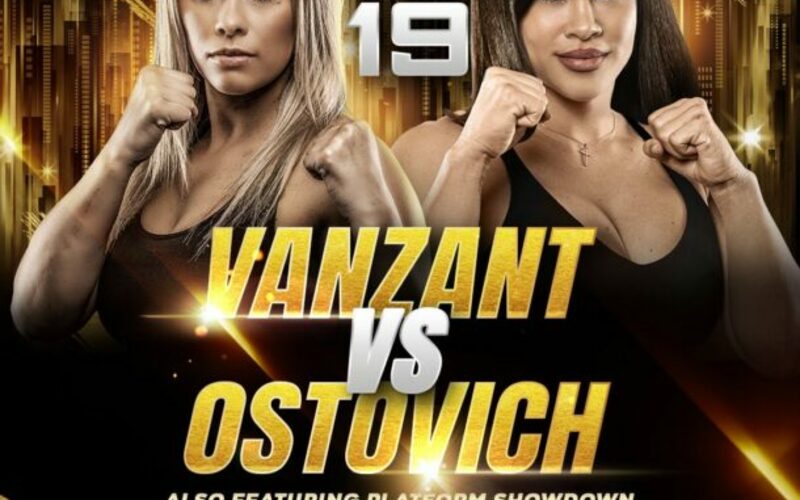 Bare Knuckle Fighting Championship returns tonight with its highly-anticipated BKFC 19 card. It is going down live from the Florida State Fairgrounds in Tampa, Florida, with a 14-fight card of fights.

The event is headlined by a rematch of former UFC fighters, as Paige VanZant returns to the ring for the second time against a debuting Rachael Ostovich. In their UFC fight in January 2019, VanZant was able to defeat Ostovich by second-round armbar submission. Both fighters then lost their next fight and found their way to BKFC. VanZant made her debut against Britain Hart earlier this year in the BKFC Knucklemania headliner, dropping a unanimous decision. Ostovich, meanwhile, will look to avenge her loss while impressing fans in her debut.

The BKFC 19 co-main event brings inaugural BKFC heavyweight champion Arnold Adams back to the ring to face British bare knuckler Mick Terrill. Adams is 4-1 in BKFC, most recently picking up a victory over Bobo O’Bannon at BKFC 16 in March. Terrill comes into the organization with experience in the British bare-knuckle boxing scene, but makes his American debut tonight.

Beyond the main event, two other pivotal women’s matchups take place on the card as well. Britain Hart brings her two-fight win streak to BKFC 19, including the aforementioned win over VanZant, to the ring against Jenny Savage, who successfully debuting with BKFC in her last outing, stopping Sheena Starr in the second round at BKFC 15. “Killa Bee” Taylor Starling also made good on her BKFC debut last time out, picking up a decision victory over Charisa Sigala at BKFC Knucklemania. She will face a debuting Cassie Robb, a 13-fight MMA veteran of King of the Cage, Invicta FC, and Rizin.

BKFC 19 also features three “Platform Showdowns”, pitting social media stars against each other in the BKFC ring. Unlike normal BKFC fights, these bouts will be three-round boxing matches with regular boxing gloves. Hip hop star Blueface takes on Tik-Tok influencer Kane Trujillo, while a fight between YouTuber and Tik-Tok star DK Money and Nick Ireland of the famed “Ireland Boys” also takes place on the main card. There will also be a Tik-Tok vs. Tik-Tok battle when Evil Hero and Dakota Olave square off.

MMA Sucka has fight fans covered with BKFC 19 results, with the preliminary card starting live at 7pm ET/4pm PT on BKFC’s YouTube page, followed by the main card at 8pm ET/5pm PT on the BKTV app and FITE TV.

Arnold Adams def. Mick Terrill via KO (left hook from clinch), 0:38 of Round 3