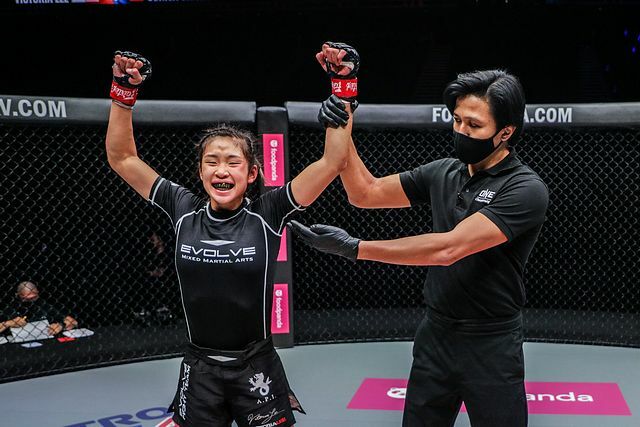 ONE Championship returned on Friday, July 30, with ONE Battleground from the Singapore Indoor Stadium. The six-bout card was electric from start-to-finish as Asia’s largest sports media property embarked on the second-half of 2021.

3 Things We Learned From ONE Battleground

In the main event, Prajanchai PK.Saenchai Muaythaigym defeated Sam-A Gaiyanghadao to capture the ONE Strawweight Muay Thai World Championship in his ONE Super Series debut. However, the remainder of the card was devoted to mixed martial arts.

Following another exciting addition to ONE’s 2021 slate, here are 3 things we learned from ONE Battleground.

Victoria Lee Is For Real

Victoria “The Prodigy” Lee was shot out of a cannon to start her second professional bout. When the bell rang, she darted out and got in the face of her Chinese opponent, Wang Luping.

Once she got the match to the canvas, she easily moved to mount and began throwing sharp elbows while looking for a submission. The talented Hawaiian secured a mounted triangle, and when that was not getting the tap she had hoped for, Lee added in an armbar until her opponent succumbed.

Lee still has a long way to go in her career, but it is clear as day that she has the raw abilities to be a future World Champion. It’s not just her pedigree. It’s her. A teenager who is unflappable under the bright lights with an immense amount of pressure on her shoulders.

“The Prodigy” is impressive in and out of the Circle. There should be no more doubt remaining about if she is the real deal. She has given the world an emphatic answer on that front.

Team Lakay Is A World-Class Camp

Within the border of the United States, it is sometimes easy to forget that there are talents around the world. Team Lakay, a gym based in The Philippines, has proven that they are one of the top gyms around the globe.

They have already produced multiple World Champions under the ONE banner, and that reign continues with Joshua “The Passion” Pacio leading ONE’s strawweight division.

However, in Jeremy Pacatiw’s promotional debut, we saw that the next wave of talent is surpassing the old guard. And that is an important marker as it proves the gym itself is growing and developing the next era of mixed martial artists in their region.

The win for Pacatiw is secondary. His striking was sharp and his grappling looked good. The young gun is still developing, but under the Team Lakay banner he is clearly achieving great success and adding the full range of weapons to his arsenal.

Team Lakay is an important cog to the worldwide growth of the sport and Pacatiw will be another piece in demonstrating how far reaching this sport truly has become.

Aung La N Sang Is Back

Aung La N Sang returned at ONE: Battleground and picked up a crucial first-round knockout over Leandro Ataides.

But it wasn’t the knockout itself that was so impressive.

After back-to-back defeats at the hands of Reinier De Ridder, there were questions about “The Burmese Python’s” ground game. In this match, he faced a five-time Brazilian Jiu-Jitsu World Champion, who had been training with De Ridder, and was taken down. Aung La N Sang showed he had been putting in the work and defended while working back to his feet.

Additionally, although he’s always had power, Aung La N Sang was able to showcase the growth he’s made in his technique. Under the guidance of Henri Hooft at Sanford MMA, the Myanmar star is putting together all of the pieces of his striking. His footwork and head movement have improved. And with that comes the results that we saw at ONE: Battleground.

“The Burmese Python” may still have work to do to regain his position atop the division, but his hard work has paid off in making him a more complete and technical mixed martial artist.