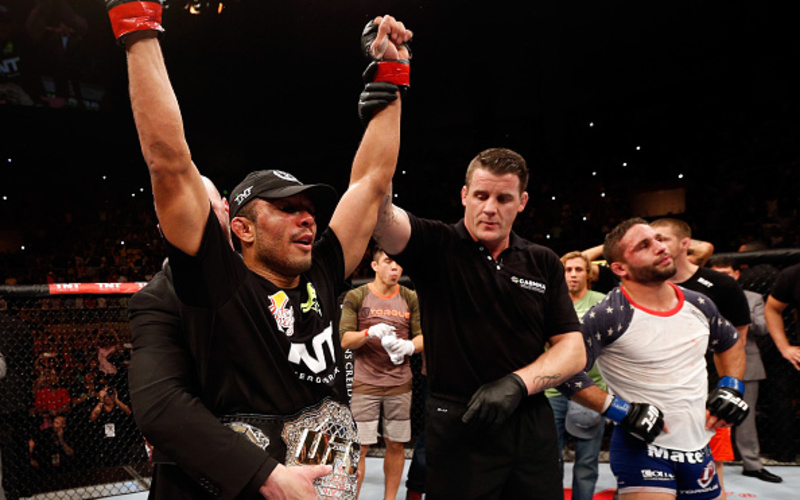 In a sport where longevity is scarce, Jose Aldo continues to defy the odds almost 12 years since winning his first featherweight championship at WEC 44. On Saturday, Aldo is set to face fellow ranked bantamweight, Pedro Munhoz.

With a win at UFC 265, Aldo has the opportunity to rattle off back-to-back wins in the crowded 135lb division. It’s a longshot for the former champion to make a run at this stage of his career. However, for him to still be in the discussion with the upper echelon the division has to offer is truly exceptional.

Let’s look below at some of the best performances of the future hall-of-famer’s career:

This was really the moment where fans started to see how great Aldo was becoming at such a young age. At 22 years old, he was in a No. 1 contender’s bout with Cub Swanson. Before there was the highlight reel KO of Ben Askren from Jorge Masvidal, Jose Aldo in a similar fashion, secured a title shot with this knockout. The reality is, this fight could have been stopped at the four-second mark. Referee Steve Mazzagatti let it go on, only to stop it seconds later.

In their first fight, Aldo earned a stoppage over Mendes with one second left in the very first round. Mendes just recently made the headlines, ending his retirement. However, on this night, Mendes was the young up-and-coming undefeated challenger and was poised to be a threat to the Brazilian. Aldo showed why he was one of the top pound-for-pound fighters in the world. With a beautiful transition that led to the knockout blow, pandemonium commenced as Aldo was in full sprint to the middle of the hometown crowd.

It was Aldo’s toughest test of his career. The champion, Mike Brown was 21-4 at the time and coming off two victories over Urijah Faber. Not to mention, Brown was on a 10-fight winning streak and was the slight favorite over Aldo. The Brazilian was calculated, and his speed advantage was evident early on. The story of the fight was how remarkable Aldo’s takedown defense was. Brown struggled to land any attempt, which ultimately led for the mismatch on the feet. He was able to flatten out Brown and landed a barrage of punches and frankly make it look easy. That was the night Aldo won the belt and began his legendary run as champion.

A rematch for the decade. One of the most exciting first rounds in featherweight history, Chad Mendes dropped Aldo only for Aldo to return the favor and put Mendes on his back minutes later. The speed and pace of both fighters were incredible in the first five minutes. Both men exchanged blows in the third round that appeared to rock each other. A back and forth classic in which Aldo would face adversity, he was able to rise to the occasion and earn the decision victory over Mendes.

The legendary leg kicks of Aldo were on full display this night in Sacramento. Urijah Faber was arguably in the top-3 of the 145lb division at this time and had already spent time as the champion before getting another crack at the WEC belt. Aldo was in total control from the opening bell and late in the second round, he started to visibly damage and compromise Faber’s lead leg. Josh Rosenthal could have stepped in on multiple occasions through the fourth round where Aldo was battering Faber in a mounted crucifix. There may not have been a fighter ever to beat Aldo on this night as it was one of the most dominant performances ever displayed by the Brazilian.