Mendes would fight for the undisputed UFC featherweight title twice and the interim title once. Though he was never successful in capturing either, he holds the distinction of only ever losing to former, current or future UFC champions. Mendes retired in 2018 after a competitive knockout loss against current UFC undisputed featherweight champion Alexander “The Great” Volkanovski.

“Money” will certainly be earning it – anonymous sources have alleged that the multi-fight contract will be the “most lucrative in Mendes’s career”, according to MMAJunkie.  It is believed that the bout will be held this October but no opponent has yet been named. The announcement was first broken by Chad Mendes on the Joe Rogan Experience podcast.

BKFC has been operating since 2018, and has produced 20 events so far. Chad Mendes is far from the only UFC alumni to fight under the promotion’s banner. Joey Beltran, Hector Lombard and Thiago Alves all hold belts in BKFC, and the promotion has also hosted Artem Lobov, Jason Knight, Rachael Ostovich and Paige VanZant. 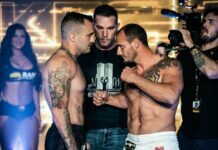