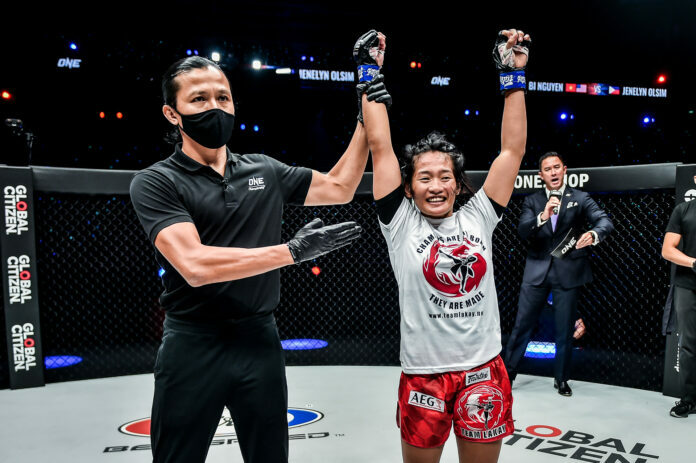 ONE Championship rounded out their Battleground series with ONE: Battleground III, a previously recorded event, on Friday, August 27.

The six-bout event, headlined by a spectacular ONE Super Series battle between Sitthichai and Tawanchai, was bolstered by five mixed martial arts bouts. Knockouts came aplenty amidst hotly contested battles.

3 Things We Learned at Battleground III

Following all of the action, here are three things we learned from the Battleground III event.

Dejdamrong Shows The Importance Of Experience

Dejdamrong Sor Amnuaysirichoke was put under pressure by his youthful counterpart, China’s Banma Suoji, from the opening bell. But after weathering the early storm, Banma slowed and allowed Dejdamrong to take over the action.

We’ve seen this before from other veterans across combat sports like Bernard Hopkins, Randy Couture, and beyond. Their careers experience helps them carry through against those trying to earn their name off of a veteran.

The Muay Thai specialist had the defense ready, both on the feet and on the mat. Once ready, he began unleashing his offense and scoring. It was clear to see the tides turn in the action, and once Banma was slow to pull the trigger, the result was inevitable.

Nobody should ever discount the importance of experience. We have seen it come into play far too often. And those veterans who can use it to their ability can jump right back into the thick of things while chasing gold one final time.

Everybody loves a good knockout, but body shots are a special thing to witness for fans. To witness the body actively shutting down as if an off-switch was hit is remarkable to see, and at ONE: Battleground III, we got to see another liver shot added to the highlight reel.

“The Hunter” Xie Wei had to wait until the third round, but he was able to deliver a brutalizing left hook to the liver to Dae Hwan Kim. The thudding impact put the South Korean down on the mat in pain while Xie delivered a couple of follow-up shots before the referee could intervene.

It was a thing of beauty.

Additionally, it marked Xie’s third-straight knockout showing. With three victories in a row, all by finish, the Chinese athlete could be making a push toward the top five by year’s end.

Olsim May Be A Factor In The Grand Prix

Former strawweight competitor Jenelyn Olsim did enough through three rounds to grab a unanimous decision win over Bi Nguyen in their atomweight affair at Battleground III. The win also advanced Olsim to the ONE Atomweight World Grand Prix.

And that is a crucial win because alternates often find themselves making the field in a Grand Prix.

If Olsim can make the tournament, she will have a size and strength advantage over many. More importantly, as she continues to develop her grappling at Team Lakay, her well-rounded skills will only serve to make her more dangerous inside the ONE Circle.

While Olsim may not have gotten the finish she wanted, she got the win and three hard rounds of work that will push her to be the best version of herself if she gets the call to replace anybody from the quarterfinals. If she can get in, there is nothing holding her back from advancing and taking down the tournament crown.