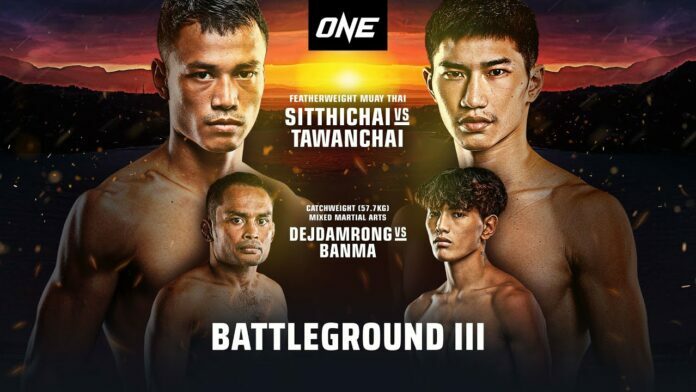 ONE Battleground III results will be updated live right here and can be found below. ONE Battleground III will have five MMA bouts and will be headlined by one Muay Thai bout. The ONE Championship event will be streamed on YouTube on August 27, 2021.

Sitthichai “Killer Kid” Sitsongpeenong and Tawanchai PK.Saenchai Muaythaigym will face off in a featherweight war. This Muay Thai bout will headline this ONE Championship event. Both fighters are filling in on short notice. Sitthichai & Tawanchai both have held decorated titles in Muay Thai, while Sitthichai has also held official titles in Kickboxing.

Sitthichai vs Tawanchai the two fighters combined have over 300 bouts between Kickboxing and Muay Thai despite both being under 30. This will be a Muay Thai bout but in four-once gloves. Both men will be determined to fight for victory as this fight will likely earn them a shot at Petchmorakot Petchyindee Academy, the current ONE Featherweight Muay Thai World Champion. ONE Battleground III results are listed below.

We are expecting to see a war when Dae Hwan Kim and “The Hunter” Xie Wei meet in the ONE Championship cage. Xie Wei, of China, will look to continue his win streak while his opponent Dae Hwan Kim, of South Korea, needs a win. ONE Battleground III results for this fight and more can be found here.

Thailand-born MMA fighter Dejdamrong Sor Amnuaysirichoke will be meeting a young and rising Duoji Banma, of China. Both fighters are looking to get back in the win column. Also, Tial Thang, of the USA, will face-off in a featherweight MMA fight against South Korean fighter Min Jong Song. Other featured bouts also include Purev Otgonjargal, a Mongolian-born fighter, against the young Englishman Ben Royle in a featherweight fight.

ONE Battleground III Results can be found above. For more results and news stick to MMA Sucka.