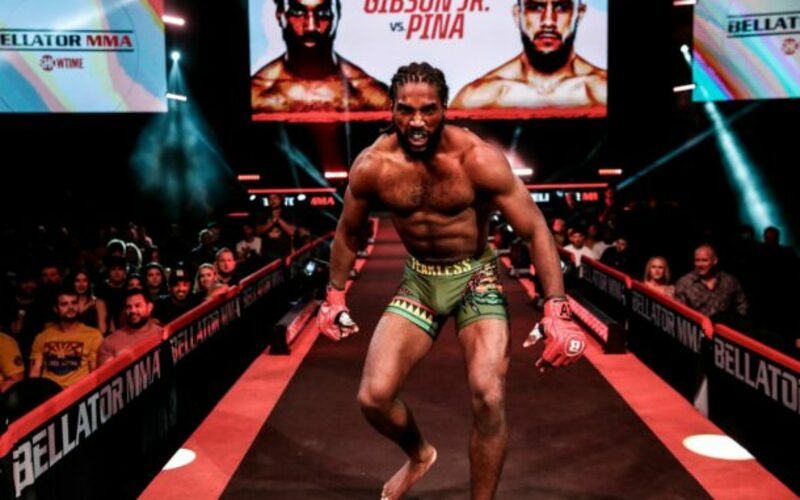 Bellator 268 did not disappoint with only four out of 13 fights going the distance. One man, who ended his fight early in the second round, was Lance Gibson Jr. He unleashed his wrath on Raymond Pina, coming away victorious via TKO.

Gibson Jr was clearly happy with his performance over Pina as he stated to MMASucka, “I was proud of myself, I was able to make him spend a lot of energy in the first then take him out with a timed knee when he shot in for a take-down.”

It was a first-round filled with wrestling from Pina, as he seemed to tire in the opening moments of the second. Gibson Jr took advantage of that and started to utilize his stand-up skills. “I felt my knee hit his chin when he shot for the double and when I sprawled I could tell he was shook from the strike, so I figured it was a good time to take him out with precision and intention of every strike.”

I was happy how the first rd went, I could feel him spending a lot of energy trying to just hold me down and I knew it would be exhausting. Also in a lot of his fights, he would get tired in the second and his take-downs would be a lot more sloppy.”

Gibson Jr boosted his record to (5-0) at Bellator 268, and he has all the belief in his ability after his latest camp. “My camp went fantastic, I was able to heal up and rehab past injuries from the fight in April and really focus on fine-tuning my skills. I had been developing my skills and training immediately after my last fight so I was in fantastic shape, allowing me to just sharpen up.

My biggest asset is my versatility in the sport of MMA I can fight and finish the fight from any position and when I get the opportunity I will.” Gibson Jr has won all three fights since he joined Bellator in 2019. He’s a menace on the feet, as well as the ground, with three TKO/KO’s and one submission finish in the first fight of his professional career.

What’s Next for Gibson Jr?

It could be the case of ranked opponent next for Gibson Jr, as the Canadian edges closer to a spot in the top 10.  He stated his thoughts on the possibility of being ranked. “It would be awesome to be ranked which I mentioned before but I know it’s just a matter of time, the more cage experience I get the more dangerous I will be.”

His career isn’t the first thing on his mind at the minute though, with his teammate Julia Budd making her promotional debut at PFL 10. “I plan to be back in early Jan/Feb, I am already back to training for my teammate Budd who will be fighting Oct 27th in PFL. Once we touch down back in Canada I will be back on the grind honing my skills.

My celebration for this victory was going to Florida for my teammate Julia Budd’s fight helping her finish up camp for her fight on the 27th of Oct. I don’t drink alcohol or party so I keep it simple with eating Jamaican and Caribbean food, eating candy, and drinking pop haha.”