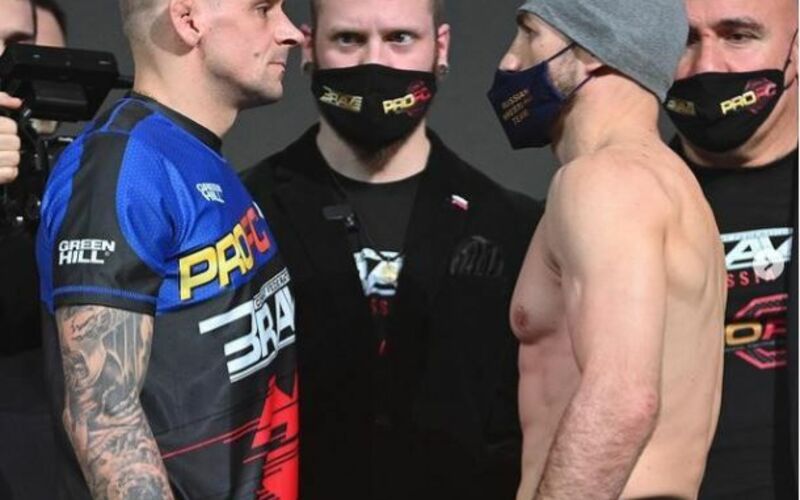 Brave CF makes it back to Russia for the second time in nearly 11 months as it hosts Brave CF 55 in Rostov-on-Don. MMA Sucka brings you live results for Brave CF 55 right here.

Headlining the 10-fight-card is a semifinal bout in the Brave CF flyweight tournament between Ali Bagautinov (20-7) and Sean Santella (23-7-2). Bagautinov was scheduled to fight Jose “Shorty” Torres however, just a few days prior to the bout Torres was struck with serious health issues. The seven-fight UFC veteran Bagautinov was adamant about being ready for whatever opponent was put in front of him. In the quarterfinal flyweight tournament bout, the 36-year-old Russian defeated fellow UFC veteran Dustin Ortiz at Brave CF 50 back in April. Since his departure from the UFC in 2016, he holds a record of 7-2 and has faced the likes of Zhalgas Zhumagulov, Tyson Nam, and Pedro Nobre. Although Bagautinov is known for being a jack of many trades, the characteristic that stands out at this point in his career is his durability.

New Jersey’s Sean Santella looks to test that on Saturday. Sean Santella is back in the Brave CF flyweight tournament after an injury that forced him out of a quarterfinal bout. The 37-year-old, former CFFC flyweight champ, will make his third walk to the Brave CF cage this weekend seeking his first victory. Training out of Nick Catone MMA, Ricardo Almedia Jiu-Jitsu, and quite a few other places in the Tri-State area, the second-degree Brazilian jiu-jitsu black belt and two-time pro MMA champion is up for any challenge presented. He has shared the cage with the likes of Aljamain Sterling, Naoki Inoue, and Joseph Morales. Sean Santella is a challenge for anyone in the Brave CF flyweight tournament, so expect a good scrap when he squares off with Ali Bagautinov.

In the co-main event, hometown hero Artur Sviridov (5-2-1) takes on Bellator veteran Ibrahim Mane (8-4). Russia’s Sviridov makes his Brave CF debut in a city he has fought in four times prior. In his five wins, he has scored two finishes, one by a head kick knockout in under a minute. Sviridov is known for his stand-up game and packs power in every strike thrown. The Russian does his training locally at Relight SC.

Ibrahim Mane makes his fourth walk to the Brave CF cage representing the Gambia. Now living and doing his training in France, he looks to get back in the win column following a tough loss at Brave CF 47. Mane has finished in six of his eight wins and has been to the judges’ scorecards just three times in 12 pro bouts. Like Sviridov, Mane prefers to keep it on the feet and has been involved in seven stoppages by way of knockout. Overall this bout is bound to be a war so do not blink.