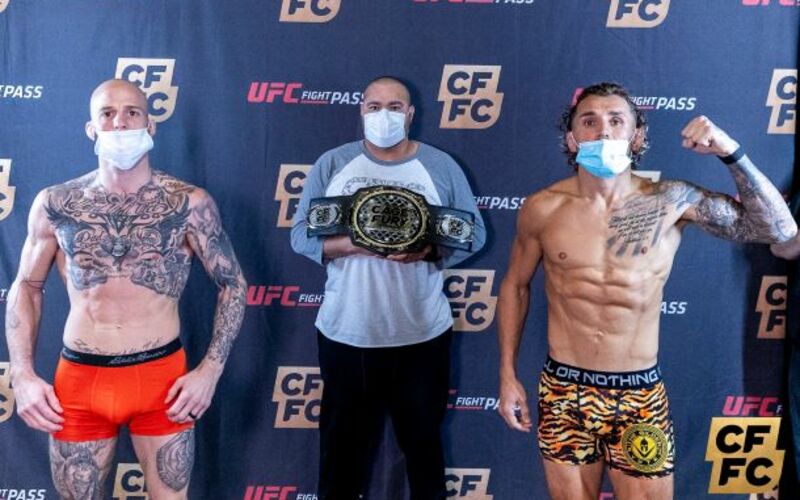 CFFC is set to end its year with a bang, as two titles will be up for grabs tonight at CFFC 104, happening live from Atlantic City, New Jersey.

In the main event, “The Praying Mantis” Frankie Buenafuente has been promoted from the event’s preliminary card to face the undefeated Blake Bilder for the vacant featherweight title after Eddy Torres was forced out of the contest. New Jersey’s Buenafuente is a Bellator and WSOF veteran with 15 fights, with three of his five losses coming to UFC fighters in Julio Arce and Bill Algeo. He last competed over a year ago, losing via unanimous decision at CFFC 89. Bilder makes his CFFC debut tonight after picking up a first-round armbar victory in his last fight to bring his overall record to 4-0-1.

Champion “Turbo” Phumi Nkuta will defend his flyweight belt for the second time against “Sunshine” Jason Eastman in the co-main event. Trained by Ray Longo, Nkuta has been dominant in all four of his professional fights, starting with a win at Bellator 231 and most recently defending his belt at CFFC 101 by fourth-round stoppage. American Top Team-trained Mississippian Eastman has a record of 7-3, but is riding a two-fight winning streak after picking up a unanimous decision victory at Titan FC 68 and a second-round submission at CFFC 100.

At middleweight, “Bodybagz” Joe Pyfer will look to rebound from his loss on 2020’s season of Dana White’s Contender Series as he faces NCAA wrestling All-American Austin Trotman. Pyfer suffered an arm injury after being slammed by Dustin Stoltzfus in the aforementioned DWCS fight, and has lost two of his last three fights. He makes his CFFC debut against Trotman, who competes outside of the Carolinas for the first time and moves back down to his natural weight class after a fight at heavyweight. After a no-contest in his professional debut, Trotman has picked up three straight finishes in a minute or less.

MMA Sucka has fight fans covered with CFFC 104 results, with the preliminary card starting at 7pm ET/4pm PT on CFFC’s Facebook page as well as their YouTube page, followed by the main card at 8:30pm ET/5:30pm PT on UFC Fight Pass.

Charlie Campbell def. Vadim Ogar via TKO (Punches) at 0:57 of Round 2

Greg Velasco def. Willie Tarpley via Submission (Rear-Naked Choke) at 3:34 of Round 2