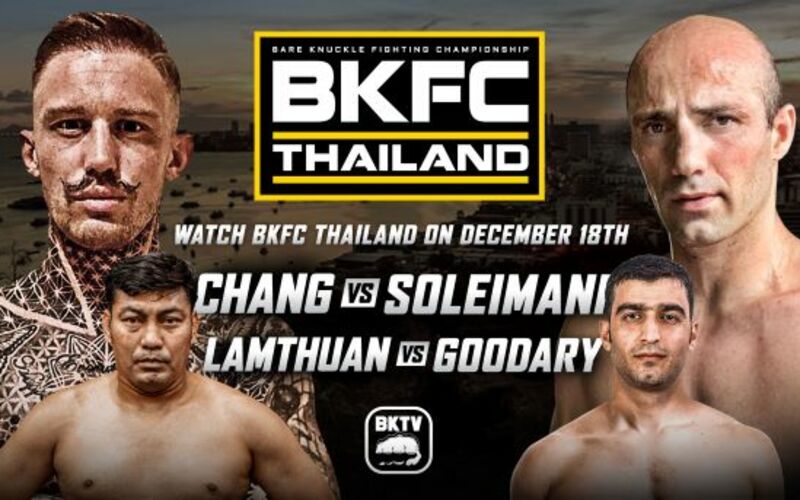 The Bare Knuckle Fighting Championship returns in a brand new way tonight as the American promotion makes its first international foray with BKFC Thailand 1. The organization plans on having BKFC Thailand be its own promotion that would serve as an offshoot of the original. Its inaugural event, also dubbed “The Game Changer”, takes place at the Pattaya Event and Convention Hall, also known as the PEACH.

Elsewhere on the card, Lethwei world champion Souris Manfredi of France will face boxing and Muay Thai veteran Saowaluk Nareepaengsri in the only women’s fight of the night, while Olympic silver medalist in wrestling Arash Mardani faces Russian MMA veteran Zelemkhan Mukushev. With the card being in the birthplace of Muay Thai, many fighters of that discipline litter the card.

MMA Sucka has fight fans covered with BKFC Thailand 1 results, with the event airing on tape delay at 8pm ET/5pm PT on BKTV.

Pongpisan Chunyong def. Victor Booty via TKO (Referee’s Stoppage) at 1:48 of Round 3

Souris Manfredi def. Saowaluk Nareepaengsri via KO (Jab) at 0:23 of Round 3

Arash Mardani def. Zelemkhan Mukushev via TKO (Injury) at 0:15 of Round 2

Sominong War def. Surachat Srirod via KO (Left Uppercut) at 1:27 of Round 2