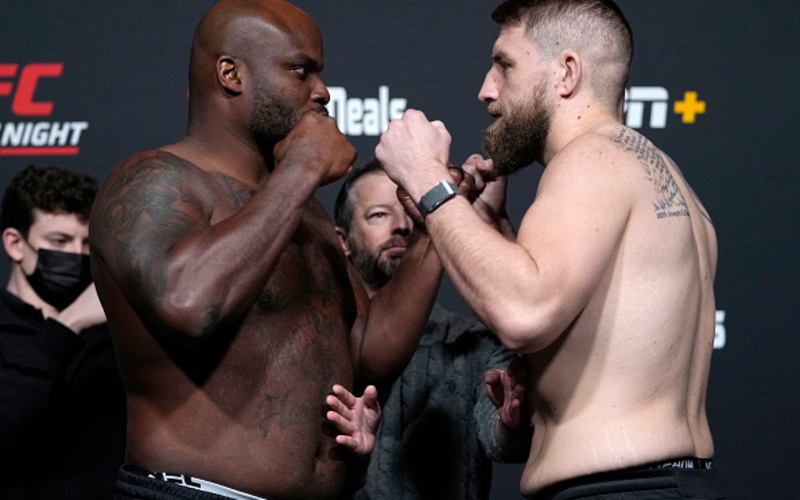 The UFC’s final card of 2021 is here as the main event features a top-ten matchup in the heavyweight division while MMASucka provides UFC Vegas 45 results throughout the day. Headlining the final card of the year will be former heavyweight title challenger Derrick Lewis and Chris Daukaus.

Derrick Lewis got an opportunity to fight for the UFC heavyweight championship back in 2018 against then-champion Daniel Cormier. Lewis came up short in that fight, as he was submitted in the second round of the UFC 230 main event. Since then, Lewis has put together a record of 4-2. Immediately following the loss to Cormier, Lewis returned to the cage about four months later where he faced Junior dos Santos in the main event of UFC Fight Night 146. That night, Lewis lost back-to-back fights for the first time in his career as dos Santos defeated him by second-round TKO.

Eight months later, Lewis returned to the cage and kicked off what would end up being a four-fight win streak. The first two wins that Lewis picked up over that time were decision wins as he defeated Blagoy Ivanov by split decision, followed by a unanimous decision win over Ilir Latifi. After that, Lewis finished off his win streak with back-to-back KO/TKO wins. The first of those was a second-round TKO over Alexey Oleinik in their main event matchup at UFC Fight Night 174. Lewis then went on to face Curtis Blaydes in another main event. He would finish Blaydes in the second round as well, giving him his fourth win in a row. In Lewis’ most recent fight, he fought Cyril Gane for the interim heavyweight championship. Unfortunately, in another title shot, Lewis came up short as Gane finished him in the third round by TKO.

While Lewis looks to bounce back from his interim title fight loss, Chris Daukaus is looking to spoil that opportunity and pick up the biggest win of his career yet. Daukaus made his UFC debut in 2020 and has already put together an impressive undefeated record of 4-0 during his time in the octagon with all four of those wins coming by KO/TKO. That also includes three straight first-round finishes. Prior to his debut, he had put together a pro record of 8-3 and was scheduled to fight for the Cage Fury FC heavyweight title before getting a call from the UFC to face Parker Porter on short notice.

Daukaus made his debut against Porter on nine days’ notice at UFC 252 where he defeated Porter by first-round TKO. In his next outing, Daukaus returned to the cage just a couple of months later when he faced Rodrigo Nascimento at UFC Fight Night 179. Daukaus finished that fight in under a minute as he defeated Nascimento by knockout for his third straight win. Daukaus’ third straight win was another first-round TKO finish as he defeated Alexey Oleinik in about two minutes during their UFC Fight Night 185 matchup. Finally, Daukaus’ most recent win happened in September at UFC 266 when he finished Shamil Abdurakhimov in the second round by TKO for his fifth straight win. Daukaus looks to make it six in a row and improve his record to 5-0 in the UFC if he can get past Lewis on Saturday.

In the co-main event, former two-time welterweight title challenger Stephen Thompson returns to the cage where he faces off against Belal Muhammad.

It has been just over four years since Thompson’s last shot at the title. In that fight, at UFC 209, Thompson lost a majority decision to the champion Tyron Woodley. Since then, Thompson has appeared six times, putting together a record of 3-3. He picked up a win in his first outing since the title matchups when he defeated Jorge Masvidal by unanimous decision at UFC 217. After that, Thompson ended up losing his next two straight. The first of those was a unanimous decision loss to Darren Till followed by a knockout loss to former UFC lightweight champion Anthony Pettis in back-to-back main events at UFC Fight Night 130 and UFC Fight Night 148. Thompson was able to snap his losing streak and ended up winning two straight fights after that. Both those wins were UD wins as he defeated Vicente Luque at UFC 244 and Geoff Neal in their UFC Fight Night 183 main event. In Thompson’s most recent fight, his win streak was snapped as Gilbert Burns handed him a unanimous decision loss at UFC 264.

As for Muhammad, he will be entering the fight on a six fight undefeated streak. Over that time, on of those fights ended in a no contest after he suffered an accidental eye poke in his matchup with Leon Edwards. Outside of that fight, Muhammad has won all five of his other fights since his last loss in 2019. Only a few months after the loss, he started his streak with a unanimous decision win over Curtis Millender at UFC 236. Later that year, Muhammad won his second straight fight when he finished Takashi Sato by submission at UFC 242. After that, Muhammad appeared only once during 2020 when he defeated Lyman Good by unanimous decision at UFC on ESPN 11. His fourth straight win came at the beginning of this year when he picked up another unanimous decision win, this time over Dhiego Lima. After the Lima fight is when the no contest against Edwards happened, but since then, Muhammad has picked up a win. That win was against former title challenger Demian Maia as Muhammad defeated him with another UD.

Kicking off the UFC’s final main card of the year will be a featherweight matchup between two exciting competitors as Cub Swanson faces off against Darren Elkins. Swanson will be entering the fight coming off a loss in his last fight while Elkins brings in with him a two fight win streak. Swanson’s last fight took place earlier this year at UFC Vegas 25 where he suffered a first round TKO loss to Giga Chikadze. As for Elkins, he brings back-to-back finishes into this meeting with a submission win over Luis Eduardo Garagorri and a TKO win over Darrick Minner.

The third fight on the main card will feature a matchup in the bantamweight division as Raphael Assuncao takes on Ricky Simon. Much like the second matchup on the main card, both these fighters bring in opposite streaks as Assuncao has lost his last three straight and Simon has won his last three straight. Dating back to 2019, Assuncao has suffered three straight losses to some of the best that the bantamweight division has to offer. First was a submission loss to Marlon Moraes, followed by a unanimous decision loss to Cory Sandhagen, and then finally capped off with a knockout loss to former bantamweight champion Cody Garbrandt. Simon, on the other hand, has won three straight since 2020. He started off with a split decision win over former flyweight title challenger Ray Borg, followed by a submission win over Gaetano Pirrello, capped off by a unanimous decision win over Brian Kelleher in a featherweight bout.

Finally, before UFC Vegas 45’s c0-main event will be a fight in the women’s strawweight division between Amanda Lemos and Angela Hill. Lemos has won her last four straight fights entering this one while Hill looks to bounce back from a loss in her last outing. Since entering the UFC in 2017, Lemos has defeated Miranda Granger by submission, Mizuki Inoue by UD, and Livia Renata Souza and Montserrat Ruiz back-to-back by first-round TKO. Lemos looks to pick up the biggest win of her career against Hill who will be looking to rebound from her most recent fight. In that fight, Hill suffered a unanimous decision loss to Tecia Torres in a rematch of their 2015 matchup that Torres also won. Hill looks to bounce back in a big way against a tough test like Lemos.

Follow along with MMASucka as we provide you with UFC Vegas 45 Results throughout the card.