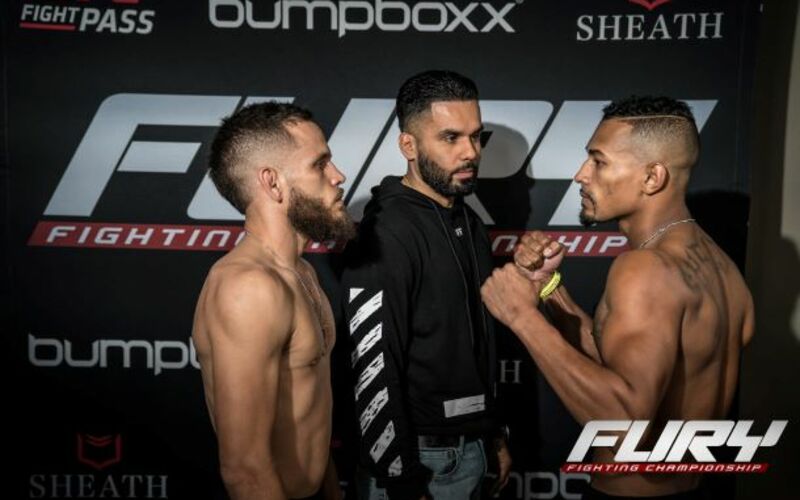 Fury FC returns to Houston, Texas to host its final card of 2021, Fury FC 55, at the Houston Arena Theater. MMA Sucka has fight fans covered live with results for the entire card.

In the main event, UFC veteran, Eric Shelton (14-7) takes on two-time Dana White’s Contender Series veteran and former Fury FC flyweight champ Jacob Silva (8-6). Eric Shelton makes his promotional debut at Fury FC 55 after a 2-1 stint in his return to the regional scene. The 30-year-old participated in season 24 of The Ultimate Fighter and made it to the semifinals. Following his tenure on the show, he was signed to the UFC and made six appearances with the promotion. He has shared the cage with the likes of  Tim Elliott, Alexandre Pantoja, and Alex Perez in his UFC career and earned victories over Jenel Lausa and Joseph Morales. Shelton does his training at Indy Boxing and Grappling and American Top Team.

Jacob Silva makes his 10th walk to the Fury FC cage this weekend with hopes of earning his biggest victory yet. After a tough two-fight skid on the biggest stage he has fought on yet, he is 2-2 in his return to Fury FC, with one of those losses being to UFC flyweight CJ Vergara. In his last bout at Fury FC 52, Silva earned a first-round submission win and got back in the win column. The 33-year-old does his training at Metro Fight Club in Houston and will be the hometown hero on fight night. This will be a high-level flyweight bout with title contention on the line.

Co-headlining the card is a lightweight scrap between submission specialist Matt Mooney (6-2) and UFC veteran Aalon Cruz (8-4). Mooney returns to the Fury FC cage after a submission win at Fury FC 48 back in July. The Texan is known for snatching limbs, as he has four wins by way of armbar and one by way of ankle lock. In his eight pro bouts, he has gone to the judges’ scorecards a singular time. The 28-year-old looks to make a statement with a victory over a highly touted opponent.

Aalon Cruz returns to the cage for the first time outside the UFC since 2019. In his last bout, he was defeated by a tough Uros Medic at UFC 259 and seeks to bounce back at Fury FC 55. The Tampa native makes his promotional debut for Fury FC tonight and has been to a decision just four times in his 12-fight career. Along with Medic, Cruz has shared the cage with Spike Carlyle, Steve Garcia, and Da’Mon Blackshear. Cruz does his training at DEFWAR in Tampa, Florida, a gym that is quite underappreciated. This is a fight to not blink while watching; it should be a fun scrap.