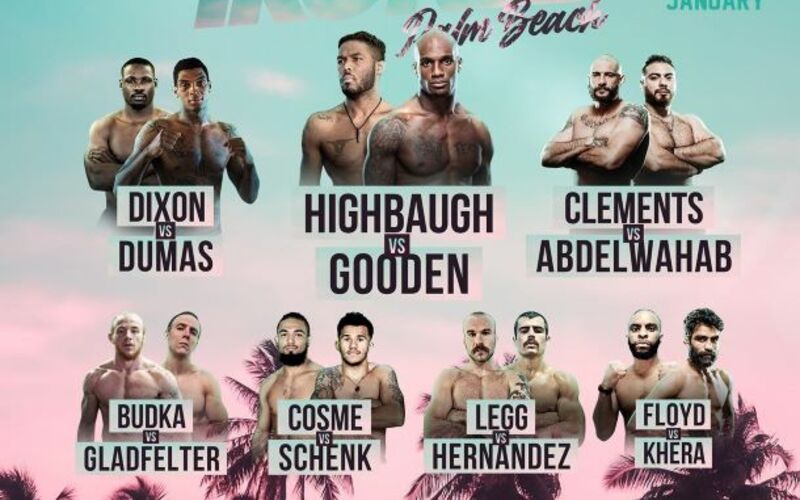 Headlining the card is a middleweight bout between UFC veteran Jared Gooden (18-7) and Aaron Highbaugh (9-4). Gooden will be making his first appearance since his departure from the UFC. The 28-year-old is force to be reckoned with on the feet with serious one-punch knockout power. With that being said, he can grapple as well, securing seven submission wins in his career. Although the Atlanta, Georgia native’s first stint in the UFC did not pan out the way he wanted, he did score a vicious knockout over Niklas Stolze at UFC Vegas 33. His resume also includes fights with the likes of Randy Brown, Alan Jouban and Abubakar Nurmagomedov. “Nitetrain” holds 15 victories by way of finish and is an electric talent in the cage. Gooden is known for his forward pressure and his ability to make his opponents fight off their back foot.

Aaron Highbaugh steps in looking to derail Nitetrain in his highly anticipated return. The Indiana native has won three of his last four, two by way of finish. The 36-year-old is a veteran of 13 pro bouts and has won belts with Colesseum Combat and Honor FC in that tenure. He has shared the cage with the likes of Khaos Williams and Cameron VanCamp and holds a win over Bellator vet Josh Streacker. Highbaugh holds five of his nine wins by way of finish and has only been to the judge’s scorecards four times in his career. Overall, this is a quality scrap between two game opponents. It is safe to say it is doubtful the judges will be needed for this one.

Also on the card, 6’7 tenured veteran Dustin Clements (4-4) takes on Egyptian Olympic wrestler Hamdy Abdelwahab (0-0) in a heavyweight scrap. Clements is a familiar face on the Florida regional scene and has been a pro since 2016. The 31-year-old is coming off a 29-second knockout victory over Buddy Boissiere at Gamebred FC 3 just over a month ago. All four of his wins have come by way of finish and he’s been out of the second round just once in his pro career. Clements has shared the cage with Bellator veterans Steve Mowry and Said Sowma.

Like Dustin Clements, Hamdy Abdelwahab also competed at Gamebred FC 3 and earned himself a 33-second finish. The 28-year-old appeared twice for Gamebred FC in a two-and-a-half-month span, scoring a pair of sub-minute finishes. It is clear why Jorge Masvidal wanted him back to make his pro MMA debut. Abdelwahab ended his amateur career in June of 2020 after defending the WCFL heavyweight strap. He concluded that chapter with a 4-1 record, two wins by finish, and his only loss coming by disqualification. Hamdy Abdelwahab is without a doubt a prospect to keep an eye on and Dustin Clements is a tough test for a pro debut.

The card also includes a middleweight war between DeWitt Dixon (1-0) and Sedriques Dumas (3-0), a bantamweight battle between Alexander Schenk (1-0) and Amun Cosme (2-0) and a catchweight bout between Luis Hernandez (1-0) and Nolan Legg (0-0).