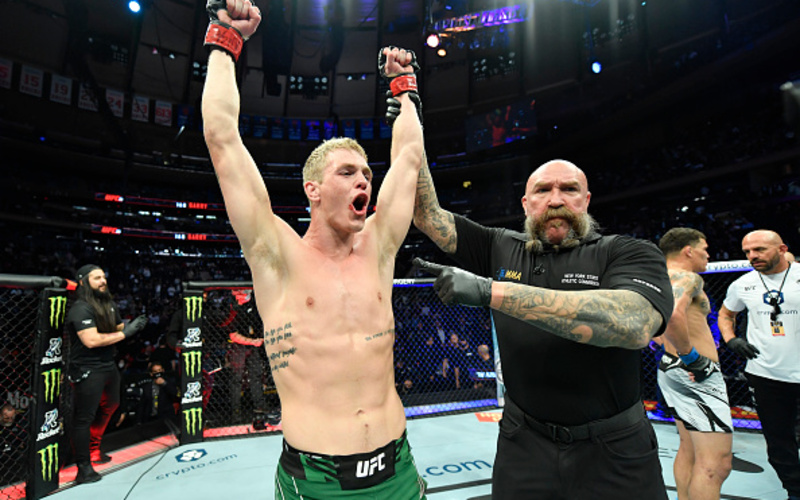 Ian “The Future” Garry (8-0), an Irish welterweight fighter who draws many comparisons to a young Conor McGregor with his outlandish personality and knockout abilities, is set to return to the octagon at UFC 273 on April 9th against Darian Weeks (5-1).

Garry, who is only 24 years old, trains out of the Florida based powerhouse, Sanford MMA. Garry initially made a name for himself by finishing five of his seven opponents in route to capturing the welterweight strap in the Cage Warriors promotion, which is the same promotion that McGregor had made his name in before his meteoric rise in the UFC.

Garry’s UFC debut came against Jordan Williams last November when he knocked out Jordan Williams at the last second of the very first round. During the round, there were close moments where Garry took some big shots from Williams, which we could attribute to UFC debut jitters, but he was able to rally and get the victory at the end. In Garry’s post-fight speech, he directly referenced one of Conor McGregor’s most famous lines, “We’re not here to take part, we’re here to take over,” firmly stating that “This is the takeover part two.”

Weeks’ last fight was in December on short notice against Bryan Barberena, who handed Weeks his first professional loss via unanimous decision. Weeks has a strong wrestling game and gas tank so he might look to challenge Garry’s grappling abilities during their bout. And even though his professional record is not as decorated at (5-0), as an amateur fighter he produced a record of (15-3). Weeks is definitely game and has a chance to halt one of the biggest hype trains currently in the UFC… but it will not come easy.

UFC 273 will be headlined by the Featherweight Champion Alexander Volkanovski who is set to defend his belt against The “Korean Zombie” Chan Sung Jung after the former Featherweight Champion Max Holloway was forced to withdraw from the fight. On the same card, the Bantamweight Championship grudge match between the champion, Aljimain Sterling and the interim champion, Petr Yan will also be settled. Sterling had won the belt last March at UFC 259 due to an illegal knee strike and the animosity between the two have been building up ever since for this long-awaited rematch.