Ian Garry – ‘The Future’ is Here 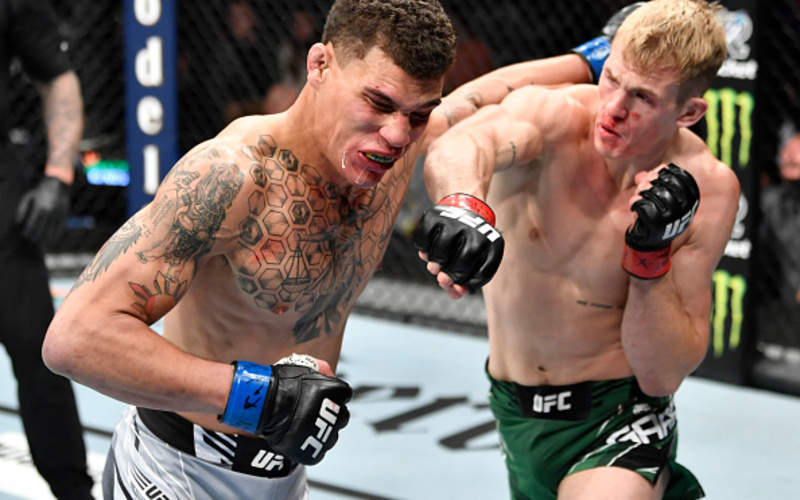 UFC 268 was a blockbuster card that importantly saw the debut of Irish star, Ian Garry. His debut certainly went under the radar after two fight of the year contenders, two title fights and multiple knockouts. With that being said, he certainly made headlines after a buzzer-beating knockout and a charismatic post-fight speech. We take a look at what kind of impact Ian Garry could have during his UFC career.

Starting his MMA career with a 5-1 amateur record, Garry made his professional debut under the CageWarriors banner. He was in no way given layups like we often see in MMA. His first five opponents had a combined record of 14-6 and this included two undefeated prospects.

In just his sixth professional fight, he fought Rostev Akman, a former two-fight UFC veteran. Akman went 0-2 in the UFC but it’s worth noting that he went 15 minutes with the well respected Jake Matthews. Garry went one better than Matthews, finishing Akman in a little under eight minutes. This set up a title fight with the experienced Jack Grant to headline Cagewarriors 125. There were plenty of stories going into this one after Ian Garry parted ways with his team ahead of the fight due to a disagreement. On the night, Garry captured the Cagewarriors welterweight strap via unanimous decision, leading to his UFC debut.

Garry was set to make his debut at UFC 268 this past weekend at Madison Square Garden and certainly had the eyes of a nation on him. After two disappointing losses for Irish stars at Bellator 270 on Friday night, Garry held the hopes of all of Ireland on his shoulders heading into his debut. Starting the fight as the 10th youngest fighter on the roster, Garry had a fairly slow start to his UFC career.

Being regularly caught on by his opponent, Jordan Williams, Garry was out-landed 24-22 in total strikes. Williams was able to control Garry up against the fence, landed the harder shots and kill the adrenaline of Garry’s UFC debut.

The finish came with just a single second left in the first round. Although he was far from dominant, Garry had the equaliser in this one, his power-counter right. Williams threw a lazy looping left hook which Garry was able to lean out of range from and counter with a crashing right-hand flush on the jaw of the American. A follow up right saw the end of the night, the Irishman got his hand raised.

Naturally, any young Irish star is going to be compared to the sports biggest ever star and fellow Irishman, Conor McGregor. As predicted, post-fight, Ian Garry rocked the mic in classic McGregor style. Walking up to the camera before the official announcement was even made, Garry stated ‘The Future is here, there was one Irishman who took over the UFC, it’s my time now‘. During his octagon interview, Joe Rogan started with ‘The hype is real‘.

Garry mentioned McGregor twice in his octagon interview so naturally, the comparisons were further made. Now, Garry has entered the UFC with a lot of hype, but with that being said, there are plenty of hype trains in the UFC at the present moment. Social media has been rife with Ian Garry before, during and after his historic performance at MSG and rightfully so. He was one of the headlines coming out of a stacked card.

It’s hard not to compare the two Irishmen, McGregor and Garry when they have now scored almost identical knockouts. Ian Garry’s knockout of Jordan Williams in his UFC debut was almost a carbon copy of Conor McGregor’s knock0ut of Ivan Buchinger in CageWarriors back in 2012.

On this date in 2012, @TheNotoriousMMA knocked out Ivan Buchinger to become a two-division champion for Cage Warriors.

It was McGregor's final fight for the promotion before signing with the UFC, where he would later become a two-division champion again 🏆🏆 (via @CageWarriors) pic.twitter.com/RYwb5inLss

What’s next for ‘The Future’, Ian Garry?

Now that he’s made the move stateside permanently to train at Sandford MMA, expect plenty of improvements in Garry’s game. He commented in his post-fight speech that he is training with the best team in the world and it’s worth remembering that this was his first fight with his current team. At just 23, Garry has a huge future ahead of him. Conor McGregor was 25 when he joined the UFC, so Garry has two years of improvements to make before he catches up with McGregor’s age when ‘The Notorious’ joined the big show.

The UFC must be sensible with the way that they build Garry. He doesn’t need to be thrust into a main card slot yet. Build him on the prelims. The last ‘Future’ we saw join the UFC was Maycee Barber. Joining the UFC at just 20 years old, she went 3-0 before suffering injuries and back-to-back losses. The UFC must build Garry more sensibly than this because he really can take the mantle that McGregor is slowly leaving behind. We know that the Irish fans get behind their fighters regardless of ability, but with the hype of Garry, the UFC will be looking to break back into the Irish market.

What is good for Garry, like Paddy Pimblett before him is that they didn’t look flawless in their debuts. They were both landed on frequently in their respected fights, didn’t look invisible and therefore, future opponents won’t be worried to take the fight.

So who could be next for Ian Garry? We spoke on the latest MMASucka podcast (which you can check out below), that Warlley Alves could be next for Ian Garry. Although he holds a vast experience advantage over Garry, he’s 4-5 in his last nine, suffering two knockout losses. Although he has a fight booked, this one makes sense regardless of the outcome. Other names include Impa Kasanganay (9-2), Kenan Song (16-6) or recent signing, Mike Malott (7-1). Don’t be surprised to see Garry back out at UFC London, which usually takes place in mid March. Whatever happens, we know now ‘The Future’ is bright.