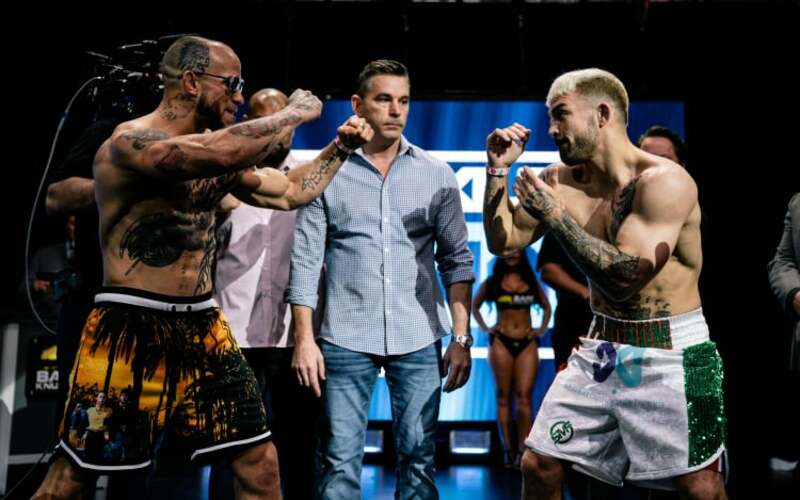 Tonight, BKFC hosts one of its biggest events yet, Knucklemania 2, at the Seminole Hard Rock Hotel and Casino in Hollywood, Florida. MMA Sucka brings you live coverage of this event and many more.

In the main event, BKFC Lightweight champion and tenured combat sports veteran, Luis Palomino, takes on unbeaten bare knuckle talent, Martin Brown. Palomino, yet to taste defeat in five BKFC bouts, has been the top dog at lightweight on the bare knuckle scene since early 2020. Making his sixth promotional walk and his fourth title defense, he is in for tough battle with Martin Brown. The 41-year-old is a notable name in the combat sports world and is a veteran of 43 pro MMA bouts. He’s shared the cage with the likes of Justin Gaethje, Jorge Masvidal and Yves Edwards. The South Florida resident is a master of his craft and looks to maintain dominance with a convincing win tonight. Martin Brown stands in the Peruvian’s way at Knuckle Mania 2. Brown is an undefeated, highly touted stand up artist with knockouts in two of his three bare knuckle bouts. After a dominant win over Bobby Taylor at BKFC Fight Night Tampa, the 37-year-old looks to keep the train rolling come fight night. Brown is a veteran of 19 pro MMA bouts and has been in the cage with Raush Manfio, Brok Weaver and Des Green. With two extremely talented and experienced artists battling for gold, it’s inevitable we see a great scrap. Expect it to be a technical war to cap off the night.

Co-headlining the card is a bout, some MMA fans say, is the most anticipated fight of the weekend. UFC veteran, Mike Perry, makes his bare knuckle debut aginast two-time TUF veteran, Julian Lane. It’s safe to say Lane and Perry aren’t the best of friends considering the mix-ups the two have had since Perry’s signing to BKFC was announced. However, this is a recipe for war and these two bring it every time they step on the canvas. Perry is coming off a win in his first boxing bout since 2015 at Triad Combat. The 30-year-old has become one of the most entertaining figures in combat sports and is a perfect piece to be BKFC’s next superstar. His experience speaks volumes, as he’s shared the cage with Donald Cerrone, Paul Felder and Vicente Luque. With the good chin, forward pressure and straight up violence he brings, we’re in for a treat tonight. Julian Lane brings a similar sort of violence to the table and has a decent chin himself. He will also have the upper hand in experience as this will be his eighth bare knuckle appearance, seventh with BKFC. The 34-year-old, known for his viral “Let me bang bro” moment on season 16 of TUF, has shared the BKFC ring with the likes of Thiago Alves, Leonard Garcia, Jim Alers and Dave Rickles. Overall, there just isn’t a scenario in which this won’t be a banger.

Some other notable bouts on the card include, Chad Mendes vs. Famez, Britain Hart vs. Christine Ferea and Francesco Ricchi vs. Jake Bostwick.

Gustavo Trujillo def. Stephen Townsel via Knockout at 1:41 of Round 1.

Christine Vicens def. Jade Masson-Wong via TKO (Doctor’s Stoppage) at :49 of Round 3.

Edgard Plazaola def. Chevvy Bridges via Knockout at 1:29 of Round 3.

JohnMichael Escoboza def. Zion Tomlinson via Knockout at 1:16 of Round 4.